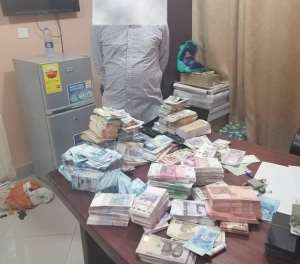 The Accra Regional Police Command on 27th October, 2021 apprehended a third suspect in connection with the trade in fake currency in the country.

The third suspect, Haruna Abudu, a Nigerian, is allegedly the source of supply of the fake US dollar notes.

Police investigation showed that Abudu operated from his textile shop at Chantai 6 to 6, Achimota.

Subsequently, a search conducted in his residence led Police to retrieve a large quantity of US dollar notes, Euros, Pound Sterling, CFA France, Nairas, Ghana Cedis, a quantity of gold dust and 11 gold bars all suspected to be fake.

The Police has extended an invitation from members of the general public, especially, persons who have fallen victim to such crime, to help identify the suspects and volunteer useful information to reveal the remaining aspects of fraudulent operations, perpetrated by the three suspects.

The information according to the Police can be channelled through the Weija Divisional Police Command, the Accra Regional Police CID and the Police Public Affairs Unit, Accra.

Further updates are that, the three suspects were remanded to Police custody today, 28th October, 2021 to reappear on 15th November, 2021.

FIFA throws out SAFA’s protest case against Ghana after WC q...
52 minutes ago

Appropriate adequate funds for establishment of Ghana’s CDC ...
58 minutes ago