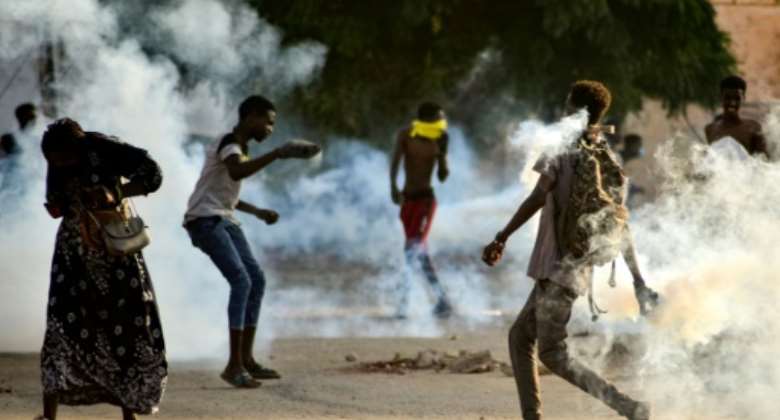 Sudanese youths confront security forces amid tear gas fired to disperse protesters in the capital Khartoum, on October 27, 2021. By - (AFP/File)

While street violence rocked Khartoum for a fourth day, the UN Security Council called on Sudan's new military rulers to restore the civilian-led government they toppled on Monday.

The council in a unanimously passed statement expressed "serious concern" about the army power grab in the poverty-stricken Northeast African nation and urged all sides "to engage in dialogue without pre-conditions".

A woman walks past shuttered shops in the Sudanese capital Khartoum on October 28, 2021, four days after the army seized power in a coup that triggered unrest. By - (AFP)

While the civilian leader, Prime Minister Abdalla Hamdok, has been under effective house arrest, the capital has been rocked by days of unrest and is bracing for major demonstrations on Saturday.

Roads have been blocked by barricades of rocks, debris and burning car tyres that have sent black smoke billowing into the sky, while most shops have been shuttered in a campaign of civil disobedience.

"We do not want military power, we want a free democratic life in this country," said one protester, who asked not to be named.

Sudanese anti-coup protesters use bricks to barricade a street in the capital Khartoum on October 27, 2021, amid ongoing demonstrations against a military takeover that has sparked widespread international condemnation. By - (AFP)

At least seven protesters were reported dead by local morgues on Monday, and an unspecified number of corpses have been delivered since, say health officials.

The coup was the latest to have hit the country which has experienced only rare democratic interludes since independence in 1956.

The World Bank and the United States have frozen aid and denounced the army's power grab, while the African Union has suspended Sudan's membership over what it termed the "unconstitutional" takeover.

The US, EU, Britain, Norway and other nations in a joint statement stressed their continued recognition of the "prime minister and his cabinet as the constitutional leaders of the transitional government".

Number of attempts to overthrow a government by continent over the past 70 years, according to data from University of Florida. By Simon MALFATTO (AFP)

Sudan had been ruled since August 2019 by a joint civilian-military council, alongside Hamdok's administration, as part of a transition to full civilian rule.

Recent years saw the country -- formerly blacklisted by the US as a "state sponsor of terrorism" -- make strides toward rejoining the international community, with hopes of boosting aid and investment.

But analysts had said the civilians' role receded before the coup, which the experts view as the generals' way of maintaining their long-held grip on the country.

Sudan's top army general Abdel Fattah al-Burhan speaks during a press conference at the General Command of the Armed Forces in Khartoum on October 26, 2021. By Ashraf SHAZLY (AFP/File)

One protester Thursday described the cat-and-mouse game with security forces, saying that they "have been trying since yesterday morning to remove all our barricades, firing tear gas and rubber bullets".

"But we go and rebuild them as soon as they leave," added the activist, Hatem Ahmed, from Khartoum. "We will only remove the barricades when the civilian government is back."

Military vehicles have deployed in the Sudanese capital Khartoum. By - (Anonymous/ESN/AFP)

Burhan, a senior general during Bashir's three-decade-long hardline rule, has sacked six Sudanese ambassadors -- including to the US, EU, China and France -- who have been critical of his actions.

Foreign Minister Mariam al-Sadiq al-Mahdi -- whose father was the prime minister ousted by Bashir's 1989 coup -- is one of the few civilian leaders not in detention and has become a leading voice of criticism.

On Thursday, she praised the 30 diplomats who have opposed the takeover, saying that "every free ambassador who opposes the coup is a victory for the revolution".

Immediately withdraw your directive to Goil; it's dangerous ...
24 minutes ago