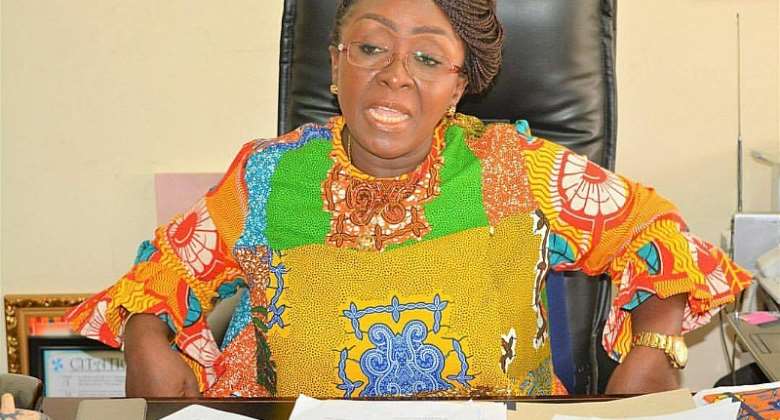 The Minority Volta Caucus in Parliament is demanding a retraction and apology from President Akufo-Addo following comments made about the Paramount Chief of Aflao regarding an uncompleted e-block project in Aflao.

According to them, the chief only spoke up against the practice where inherited government projects are neglected by successive governments.

The Chief is reported to have given an ultimatum to the Minister of Education to complete the project.

President Nana Addo Dankwa Akufo-Addo in response to a question during an interview on Peace FM last week, questioned if the chief has the power to give such an ultimatum to the minister.

He thus asked the chief to complete the project if he wants to.

But addressing the press in Parliament, MP for Ketu South, Dzifa Gomashie, indicated that the comments are unacceptable. She thus impressed on President Akufo-Addo to render an unqualified apology to the chief.

“The respected traditional ruler merely advocated for an abandoned E-Block in his community to be completed, so his people will have fair access to education. As citizens and as taxpayers, that wasn’t too much to ask for, and he deserves praise for prioritizing education and speaking out against the culture of abandoning inherited projects.”

“So he does not deserve such disrespect from the president of the Republic of Ghana. The president's conduct which we do not see him exhibit to our traditional rulers in other parts of the country is a total affront to the entire Volta Region and Aflao Traditional Area, and so we demand a retraction and apology from the president.”

Already, the Member of Parliament (MP) for North Tongu, Samuel Okuzeto Ablakwa , has taken on President Nana Addo Dankwa Akufo-Addo for his comments.

According to him, the President used intemperate language that should not be coming from him as the person expected to strengthen national cohesion.

“Our revered chiefs and custodians of our proud traditions deserve utmost respect at all times, regardless of which part of the country they exercise their authority.”

“The venerable Torgbui Adzongaga Amenya Fiti V and the people of Aflao deserve an immediate retraction and apology from President Akufo-Addo.”