The President and his Travels 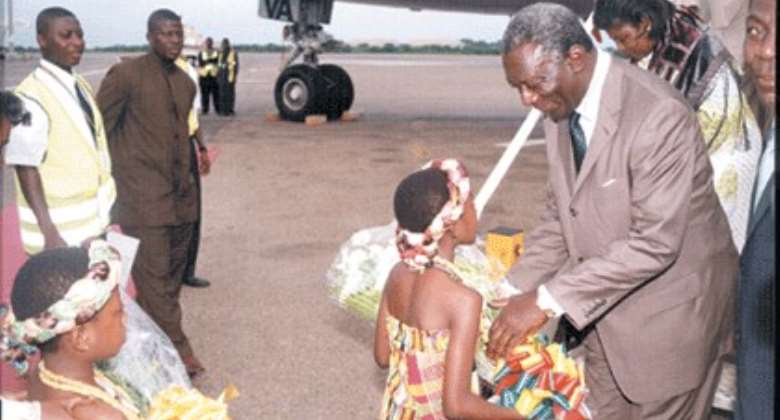 In an article on Ghanaweb on 23rd October entitled “Presidential travels under attack”, The President is reported to have told the BBC “that he will travel, rubbishing the criticisms from home”. I find this remark very interesting coming from the Globalist who is also quoted as saying: " Ghanaians can no longer afford to sit on the fringes of human endeavours, existing out of the charity of the world. It is time for an enlightened, creative and experienced leadership that will lead our nation out of the doldrums of poverty, ignorance and disease and serve as an inspiration to the rest of Africa”. Do his critics now misunderstand the wider implications? – We are told that “The world is now a global village. It is a smaller world, and competition for the available resources is very keen. It is taking the Chief Executives of the various countries to compete for the resources”. Really? Pardon me – Mr Special Assistant to the Minister of Information and Presidential Affairs. The world has always been a global village otherwise it would not be called The World. The People of Ghana elected the President to office. He has a duty to explain to these people if they do not understand any of his actions. To ‘rubbish’ criticisms and state categorically that “I will travel” whether they liked it or not is not what is expected from someone who is described as having attributes such as “caring, sensitivity, honesty, and due respect for his fellow being. If this is the same President I know, then he is supposed to be a good listener, very diplomatic in his dealings with friends as well as foes, strong and disciplined, and a great consensus builder. It is important to note that such remarks do not reflect democracy. They lean towards dictatorship. The People of Ghana collectively vested supreme power in the President and his Government. These same people, the common people, who are described here as critics, have equal rights and privileges: they have political, social or legal equality in the affairs and economy. Their feelings must be addressed properly and not rubbished on international media. The President and his public affairs team need to make appropriate pronouncements. The average Ghanaian does not limit him or herself to local information any longer. We have grown and matured in our source of information and would like to our views and feelings to be addressed sensitively both at home and away.