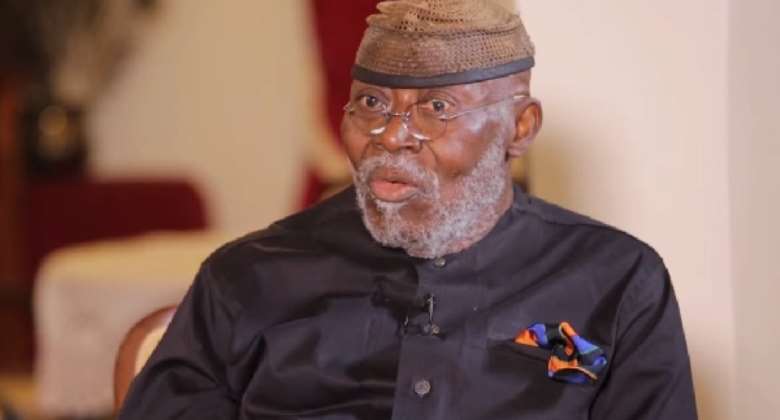 Dr Nyaho Nyaho-Tamakloe says President Nana Addo Dankwa Akufo-Addo is the most lawless president Ghana has ever had and do not believe in the rule of law.

The alleged undemocratic act of Nana Akufo-Addo, according to Dr Nyaho-Tamakloe in recent times “has found its way into our local government system.”

Speaking at a press conference on the recent confirmation of DCEs at the local level on Thursday, 28 October 2021, the suspended NPP stalwart reminded Ghanaians that voting for DCEs must be done in a free and fair manner.

He noted that “the composition of our assemblies are made up of experts, elected assembly members from the various electoral areas within the district, chiefs and opinion leaders. These people are expected to be people of integrity, conviction, matured and above all with the development of their locality at heart.

“These people per our constitution must at all-time be allowed to vote for or against any government appointee who is nominated by the president without any interference or compulsion but by their own conviction.

“This is a sole right given to assembly members for which no one shall influence in any shape or form by threat, intimidation, assault or pressure that will interfere with the exercise of such right.”

Dr Nyaho-Tamakloe bemoaned that although Ghana continues to grow, the country’s growth must be seen in its decentralisation system to aid peace and development in the localities but that is not what is happening.

In his opinion, this government led by Nana Akufo-Addo “has taken our dear nation back.”

Justifying his point, he said “looking at happenings in the recent confirmation of chief executives at the various assemblies these acts cannot be gloss over because it is undermining the democracy that we have enjoyed for the past 28 years and still counting.”

He explained further that “the Local Government Act 2016 (Act 936) (section 21) mandates the assembly members to go through a democratic process in confirming the respective nominations made by government “but what did we see in the various assemblies in the just ended District Chief executive confirmations?" he quizzes.

Dr Nyaho-Tamakloe alleged that the confirmation of DCEs witnessed “the incidence of violence, deployment of NPP vigilantes clothed in military uniform to prevent assembly members from voting and in some cases prevented them from even entering the halls where the elections was to take place.”

Citing examples, he said “in the case of Kumawu, the Honourable Member of Parliament for that area who is part of the composition of the assembly was denied entry into the voting hall. This unfortunate incidence cannot be overlooked and the needed authourities must be called to book.”

“The issue of bribery in some assemblies including Cape Coast could not be labeled as democratic. In Assin South, 16 assembly members had to invoke curses on the regional minster and the Police commander and the DCE for preventing them from voting after they later realised the venue for voting had changed to another venue without informing them,” he stated.

“What sort of democracy are we practicing?” Dr Nyaho-Tamakloe quizzed adding “our party was based on democratic principles and some of us will make sure that we go back to our roots. Our roots have been democratic and it will continue to be so.”

Citing some more examples, he said “Ga Central in the Greater Accra region experienced some violence where the presiding member of the assembly was assaulted and the Achiase district was not exempted from this bloody act…”

“Ghana as a country cannot continue like this under this NPP government led by Nana Akufo-Addo. This indicates how unpopular and disappointed the people of this country are against the undemocratic moves by this present government.”

Many of these happenings Dr Nyaho-Tamakloe said “occurred in areas where the old chief executives were re-nominated for their second time and most reasons given by the assembly members for rejecting them are lack of development in their localities, lack of good human relation on the part of the chief executives and many other reasons. The chief executives are indeed suffering from the deeds of their appointer who has starved the assemblies of their common fund for four quarters and had reintroduced the capping system to take part of the monies…”

Dr Nyaho-Tamakloe, has, thus, called on the government, the Ghana police service led by IGP Dr Dampare and the Parliament of Ghana to as a matter of urgency investigate “these happenings in the various assemblies in order to bring these perpetrators of this undemocratic acts to book.”

Hottest Photo Reports
Catch up with all the political quotes from our politicians.
Advertise here
More Headlines
ModernGhana Links
The Clerks of Parliament walked me to my reserved seat in the Chamber but I opted for the public gallery — Asiedu Nketia
You’ve always made me proud as your wife – Lordina celebrates Mahama at 63
Court issues warrant for arrest of Xavier Sosu for 'disrespect'
Swiftly intervene to pull the country together amid majority, minority impasse – Adongo to Akufo-Addo
My presence in Parliament gingers, inspires NDC MPs – Asiedu Nketia
2022 budget: We're shocked, disappointed in Majority attacks on Bagbin – NDC caucus to majority
The days where you had majority to bully minority are over – Haruna Iddrisu jabs NPP MPs
Mahama clocks 63 today
You're an 'irresponsible' bunch for 'running away' from own budget; blame yourselves – Minority fights Majority
TOP STORIES

The Clerks of Parliament walked me to my reserved seat in th...
46 minutes ago