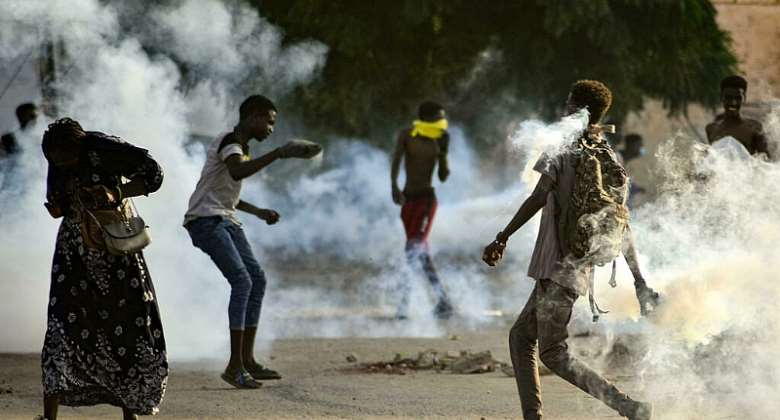 In a statement posted on social media, ministries and agencies of Sudan's most populous state, Khartoum, which includes the capital and twin city Omdurman, declared a general strike – although they said they would continue to supply flour, cooking gas, and emergency medical care.

The main market, banks and fuel filling stations in Khartoum were closed on Thursday. Hospitals were open only for emergency services.

Health officials have confirmed seven deaths since Monday when General Abdel Fattah al-Burhan – Sudan's de factor leader since the departure of Omar al-Bashir in 2019 – dissolved the government created to lead the country to full civilian rule and arrrested leading politicians including the prime minister Abdallah Hamdok.

With activists mobilising for mass demonstrations later this week, there are fears the death toll could rise.

The US Secretary of State, Antony Blinken, added his voice on Thursday to the international pressure on al-Burhan.

In a phone call with his Sundanese counterpart, Mariam Sadiq al-Mahdi, Blinken said his government condemned the military takeover and the arrest of the civilian leaders.

Blinken said on Twitter that they also discussed how his country could best support the Sudanese people's call for a return to a civilian-led transition to democracy.

The World Bank stopped grants for projects in Sudan on Wednesday in response to the military's seizure of power as state oil company workers, doctors and pilots joined civilian groups opposing the takeover.

"I am greatly concerned by recent events in Sudan," World Bank President David Malpass said in a statement from Washington.

"And I fear the dramatic impact this can have on the country's social and economic recovery and development."

His comments came as pilots from the national carrier Sudan Airways went on strike along with staff from Badr and Tarco Airlines.

Doctors belonging to the Unified Doctors' Office group of unions also said they were striking. The doctors were one of the driving forces behind the uprising that brought down Bashir.

Hamdok had touted assistance from the World Bank as a significant accomplishment and was depending on around 2 billion euros of funding for several large development projects.

The 65-year-old on Thursday remained under guard at his home. A delegation of European and American envoys reported him to be in good health following a visit on Wednesday.

Western governments have called for restoration of the council and the release of civilian leaders.

But al-Burhan has shown little sign of emollience. Sudan state TV reported that Burhan had dismissed six Sudanese ambassadors from their posts, apparently because they rejected the military takeover.

The six were envoys to the United States, the European Union, China, Qatar, France and the head of mission to Geneva.

Power-sharing between the military and civilians had been increasingly strained over several issues, including whether to send Bashir and other military commanders to the International Criminal Court, where they are wanted for alleged atrocities in Darfur.

Burhan said on Tuesday the army had no choice but to sideline politicians who he said were inciting people against the armed forces.

He said he acted to stop the country slipping into civil war.

Volker Perthes, the United Nations special representative, met al-Burhan on Wednesday and told him the UN wanted to see a return to the transition process and the immediate release of all those detained.