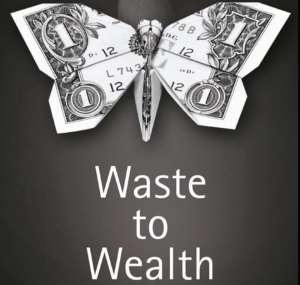 “ … while substantial progress has been made in increasing access to clean drinking water and sanitation, billions of people – mostly in rural areas – still lack these basic services.” United Nations Sustainable Development

Goals No. 6: Clean Water and Sanitation

WASTE IS WHATEVER people no longer have value for, and wish to dispose of. The Basel Convention (1989) defines “waste” as “substances or objects which are disposed of or are intended to be disposed of or are required to be disposed of by the provisions of national law.” It is called trash, rubbish, refuse, garbage, litter or effluvium, in other similar contexts. Now, solid waste is defined as “natural resources out of place” or as “new materials for technologies not yet found.”

All the Districts, Municipal and Metropolitan Assemblies have got “waste management” departments and their job is to see to the proper disposal of waste from our homes and environments. “Waste management”, therefore simply, refers to how waste is managed from its inception to its final disposal, including the collection, transport, treatment and disposal.

We highly commend the German Agency for Technical Cooperation (GTZ) for its assistance for the house-to-house collection of waste, particularly in Accra in the 1980s. This extended to Kumasi in the 1990s. There are designated areas in the cities and towns for the dumping of refuse which is later collected and dumped at “landfill” sites away from the urban cities and towns. The problems of landfills are identified as odour, insufficient covering materials, the breeding of flies and other vermins. The urban centres, however, keep swelling in terms of population and landfill sites are turned into building plots, to get accommodation for the teeming population.

We may recall the colonial times of “saman-saman” (summons-summons), the itinerant “sanitary inspectors” who would visit homes to check for the disposal of waste. The officers, usually in khaki uniform would inspect the houses, locate areas where children go to toilet and “saman” the household or particular woman whose child has “messed” up a place in the house. There were unkind rumours of particular officers bent on finding trouble for identified women and would themselves hide in a place in the house to ease themselves and charge a household of generating a nuisance, and at the District Courts such households were not be spared.

Hence, the commissioning of the Accra Compost and Recycling Plant (ACARP) with a warm embrace. The Jospong Group of Companies, with the Executive Director, Mr. Joseph Siaw Agyapong with their partners Lubo Recycling Systems of the Netherlands have established the plant which was “commissioned” by the President, Nana Addo Dankwa Akufo Addo. It is a €20 million facility whose aim is to process 2,000 tonnes of waste per day – from the existing capacity of 600 tonnes per day.

In a research study “Decentralisation and Solid Waste Management in Urbanising Ghana: Moving Beyond the Status Quo”, Richard Kyere, Michael Addaney and Jonas Ayaribilla note: “Waste management is competing with more pressing economic and social issues such as social protection programmes, education and health. The government of Ghana has, therefore, decentralized the waste management system in the country…”

The study found that “waste management remains a major challenge to governments in Africa. In Ghana, the increasing rate at which waste is generated in the cities is alarming, yet government has not been able to respond in equal measure.” The President acknowledged the fact that “integrated waste management facility required- huge financial outlay amid competing needs of other sectors of the economy on government budget”. This weakened the position of government to finance such projects. The President had promised the whole nation to make Ghana one of the cleanest countries in Africa, and Accra, “the cleanest city in Africa.” This is a herculean task, and Jospong Group of Companies is contributing its quota in no small measure in this direction.

“In this regard, government has taken the requisite steps to create the enabling environment and framework for the private sector to partner government in finding lasting solutions to this herculean challenge, says the President.”

Some of the benefits of the project include the production of organic compost for horticultural production. This should delight Hon. Dr. Owusu Afriyie Akoto's “Planting for Food and Jobs.” Besides this, it would create jobs for more than 300 people –either directly or on part-time basis.

The United Nation's Sustainable Development Goals would see this as refreshing. The SDG Six demands the provision of clean water and sanitation for all. As noted by Mr. Agyapong: “ACARP is a workable solution to the daunting waste management challenges confronting the people in the national capital… It is a direct response to attaining Goal Six of the Sustainable Development Goals which demand the provision of a clean environmental sanitation management to protect our ecosystem and promote healthy environments.”

We may care to note that we have a burden of plastic and electronic waste. With over 40 plastic producing industries in Ghana (plastic bottles, polythene bags, sachets, wrappers), the problem is compounded by our own queer social habits: discarding these wastes haphazardly. The trade in second hand electronic equipment also plays a negative role: obsolete mobile phones, television sets, computers and similar electronic equipment declared as waste by the developed countries are imported into the country and end up being burned to create a health and environmental contamination.

And, again, in Accra, the President launched the “Clean Your Frontage” campaign last week. The initiative is to rid the Greater Accra Region of filth and also green portions of the environment in order to enhance its beauty and improve health.

We are told that the campaign will include the deployment of City Response Team, the evacuation of accumulated refuse at sanitary sites. There will also be daily sweeping of streets, kerbs, walkways and open spaces. Besides, concrete bins will be located on major highways, with the desilting of public drains, the weeding of road medians, the greening of open spaces as well as the painting of kerbs on ceremonial streets. And Section 296 of Criminal Offences Act (Act 29) states: “Whoever does any of the following acts shall be liable to a fine not exceeding Gh¢200,000.00 namely: 1. … places, or causes to be placed any carrion, filth, dirt, or rubbish or any offensive or otherwise unwholesome matter on any street, yard, enclosure, or open space, except at such places as may be set apart by the local authority or the health officer for that purpose…”

You will love Nana Prah's Assin-Kushea; the community has been conscientised: no littering – with dustbins at vantage points. Even school children are schooled not to litter! It is attitudinal or behavioural change, and Assin-Kushea has shown us the way. Let us learn from the cleanest town in Ghana.

As we in Ghana struggle to rid our cities, towns and villages of waste, Norway cannot get sufficient waste to operate their incineration plants for energy. For Oslo, it is waste-to-energy, and Norway has to import rubbish which has, thus, become a great market commodity.

We daresay that if Rwanda has been able to “make it”, why can't we?