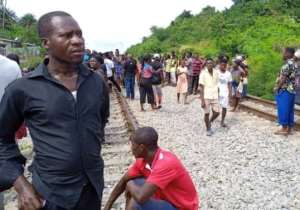 A male student, believed to be hearing-impaired, was crushed to death with his body dismembered by a moving train at Nkotompo near Sekondi on Tuesday.

The 22-year-old student of the Takoradi Technical Institute (TTI), identified as Stephen Duku, was on his way to school when the unfortunate incident happened at about 8am.

According to eyewitnesses, the train driver spotted Duku from afar and started blowing the horn to attract the attention of the pedestrian, however, the victim did not notice due to his inability to hear very fast.

The victim, according to the eyewitnesses, lost his balance when some onlookers tried to draw his attention and in the process he allegedly fell right in front of the train and was sadly crushed.

The assembly member for the area, Anthony Ephraim, speaking on Takoradi-based Skyy Power FM said the train was heading towards Sekondi when the accident occurred.

“He is someone who is said to be suffering from hearing impairment, so he possibly did not hear the sound of the train,” he said.

He said the deceased was a regular user of the rail lines on his way to school, adding, “It is something most of us in this part of the community do. We use the rails very often, even kids do that and we never anticipated that this will happen to him today.”

Meanwhile, officers from the marine police of the Ghana Police Service were called to the scene. They picked the lifeless body to the morgue for preservation.

Immediately withdraw your directive to Goil; it's dangerous ...
30 minutes ago