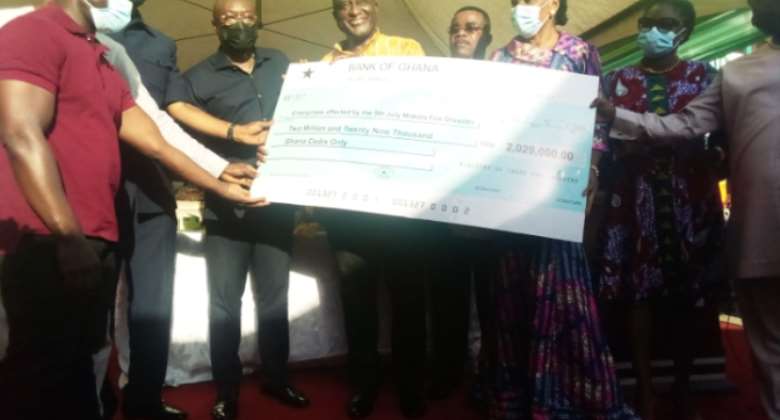 Government through the Ministry of Trade and Industry has released an amount of GHS2,29,000.00 to be disbursed to traders in the Makola July 5 fire disaster.

About ninety eight (98) victims were identified as having suffered levels of losses as a result of the unfortunate fire incident.

The minister, Alan Kojo Kyerematen during the presentation said, it is an emergency financial support by Government designed to minimise the effect suffered by the enterprises as a result of the fire disaster.

About three-storey market building with basement situated at Makola was gutted by an inferno on July 5, this year.

According to the minister, aside the ninety-eight (98) Enterprises directly affected, about 300 jobs were lost to the disaster.

“I promised you on behalf of the president that government will not ignore your plights in these trying times, reason this support is here today.

“This support we believe will go a long way to mitigate the adverse effects on your businesses as a result of the fire incident.”

The minister said, as part of government’s plans to boost trade comes the 1D1F initiative to produce locally manufactured products to ease the burden of importation of foreign products.

He added that government’s plans of 1D1F initiative capture traders as key actors in view that manufactured products require traders to purchase to the final consumer.

“By acting as the channel between producers and consumers, trading has the potential to provide critical information as inputs into the production process, source of employment as well as serve as a platform for revenue mobilization in support of Government projects and programmes.”

The minister highlighted that government’s plan to boost trading business is to provide market infrastructure with available shops and stores to eradicate street hawking.

In addition, the ministry is in talks with leaders of the Ghana Union of Traders Association (GUTA) to establish a bank solely for traders.

According to him, the bank will facilitate the provision of soft loans to its members.

President of the Ghana Union of Traders Association (GUTA), Dr. Joseph Obeng, speaking to the media in an interview welcomed the move.

He indicated that in spite of the inadequacy of the grant comparing the level of damage, however, believe it will to the large extent mitigate the losses incurred by its members.

In response to the establishment of the GUTA bank, he said the major problem of the trading facility has been access to loans with low interest.

"...because we command the bulk of the savings that we do in the country and yet we do not get the benefit thereof. The mainstream banks are taking it all from us so now arrangement is far ahead for us to also establish 'Ghana Traders Bank' where the ministry has giving us consultancy. We are going to formalize the 'susu' kind of loans and all that and put it in a very innovative way so that we can give loans to ourselves at affordable rate, so this is the way forward.

"We have talked to the president himself and plans are far ahead to launch this traders bank."

On insurance, he said traders are willing to insure their wares but the insurance companies are unwilling due to the large risk involved due to the infrastructure nature of the market.

"We have talked to the insurance commission in this regard that if they have to look at risk and then avoid insurance then what is the essence of insurance," he stated.

But, CEO of Ghana Enterprises Agency, Mrs. Kodi Antwiwaa Yankey-Ayeh said to avoid future occurrences is to ensure the strict adherence of building protocols of electrical installation and insurance.

"To avoid relying on government each time there is a disaster, we want them to insure their products so, in due time, we will be engaging them extensively to push for insurance in this regard," she posited.