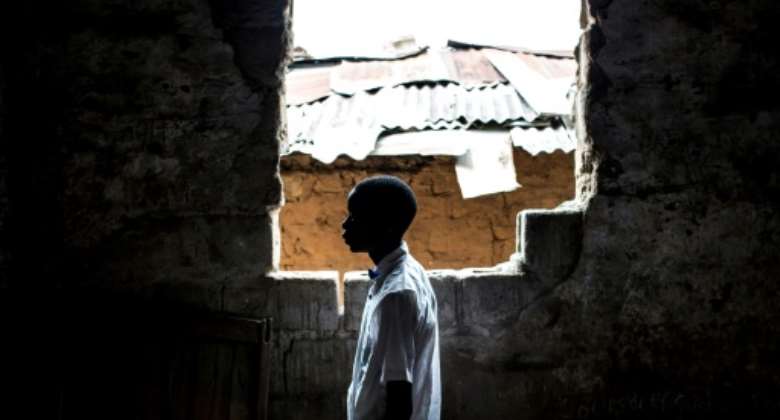 A former child soldier studies at a reintegration facility. By JOHN WESSELS (AFP/File)

Some of the DR Congo's former child soldiers have become traders, hairdressers and tailors, but many struggle to recover a normal life.

Dreams of becoming a farmer or teacher run up against tough conditions in a society deeply afflicted by unemployment and poverty.

Clement Kahindo, supervisor of a temporary shelter in Goma, capital of North Kivu province, goes through the list of problems.

His facility is managed by an NGO called Cajed, which works for underprivileged young people and currently accommodates around 40 children aged 10 to 17 recently extracted from armed groups.

"They are taught how to behave properly, to read and write. They do drawing, basket-making, gardening, the washing up," he told AFP.

What about teaching them a trade? "We do that sometimes, but not so much," Kahindo said. "We lack the funds."

But he proudly pointed to the success of a young man who had been given a sewing machine and has since regularly visited with reports of his progress. Another runs a hairdressing salon.

Kahindo said many former child combatants were overwhelmed by the horrors they had witnessed in a part of the country that has been ravaged by violence for more than 25 years.

"They have seen killings, some of them have carried out killings themselves, like the teenager who was forced to tie people up and bury them alive," Kahindo said.

"A child who stays for two or three years in an armed group goes to the front."

But in eastern DRC's North and South Kivu, as well as Ituri province, the front line and the conflict itself can be volatile.

The causes of violence in this troubled region are often complex and overlapping, rooted sometimes in ancient grievances but also overlain with the activities of foreign rebel groups and ethnic militias.

In the 1990s, child soldiers known as "kadogos" were numerous in the rebel army of Laurent-Desire Kabila, who overthrew president Mobutu Sese Seko in 1997.

According to a task force on children and conflicts led by the child protection section of the UN mission in the country, MONUSCO, and by UNICEF, 13 armed groups still feature on a blacklist for enrolling children. The DRC's post-Mobutu army has been taken off the blacklist.

The number of child soldiers in the DRC is hard to estimate, although the tally runs into the thousands.

The causes of their enrolment vary, experts say.

Between 3,000 and 5,000 children become combatants each year, according to the MONUSCO estimate, and Cajed says that between five and 10 percent are girls.

Some of the children may be abducted by force, but others join voluntarily, sometimes to escape poverty, take revenge or bask in the supposed prestige that comes with their role, Cajed says.

Some are recovered after a direct approach by MONUSCO to the commanders of the armed groups, others flee or are released during army operations against the rebel groups.

He had spent two years in an armed group that he had joined to defend his community.

"My father had been killed," he said, "and my mother went mad."

Between 3,000 and 5,000 children become combatants each year, according to a MONUSCO estimate. By MARCO LONGARI (AFP)

Miruho was taken in by the Office for Voluntary Work in the Service of Children and Health (BVES), an NGO, which paved the way to studies and a degree in sociology.

After marrying and becoming a father, Miruho took to selling flour in Panzi on the outskirts of Bukavu to help make ends meet. He does not complain but would rather have work that is in line with his education and hopes.

At the age of 13, Christian Mulindwa was coming home from school when he was kidnapped by an armed group. He managed to get away two years later and was taken in by the BVES.

In 2010, he and two other young people created an association which supports and employs mostly former child soldiers.

"We had no standing in the community. We joined forces to boost our morale," Mulindwa told AFP.

He admitted that his group had had many setbacks.

"People who were demobilised without getting the right support later took up arms again," he said.

At Cajed's base in Goma, four youngsters aged 14 to 17 are full of hope, preparing to rejoin their families in Masisi, farther north. Each has a "reintegration kit" consisting of a saucepan and a hoe.

Avril, whose name has been changed for the purposes of this article, is 12 years old. He fled the armed group that seized him.

While the four teenagers will leave, Avril will stay a while longer at the centre, where he likes to play football. One day, he said, he will be a farmer.

Court withdraws arrest warrant for Xavier-Sosu after reporti...
35 minutes ago