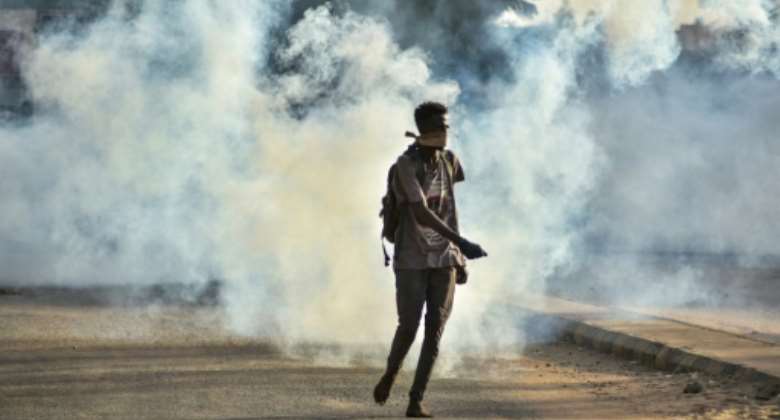 A Sudanese protester walks as tear gas fired by security forces swirls around on October 27. By - (AFP)

Seven protesters have been confirmed killed since Monday by morgues in Khartoum and its sister city Omdurman, a health official said, adding that more corpses had since been received, some with wounds caused by "sharp tools".

Top general Abdel Fattah al-Burhan -- Sudan's de facto leader since the 2019 ouster of autocrat Omar al-Bashir -- on Monday dissolved the fragile government that had been meant to shepherd the country to full civilian rule.

The World Bank and the United States have frozen aid and denounced the army's power grab, while the African Union has suspended Sudan's membership over what it labelled the "unconstitutional" takeover.

"Security forces have been trying since yesterday morning to remove all our barricades, firing tear gas and rubber bullets," said protester Hatem Ahmed, from northern Khartoum.

"But we go and rebuild them as soon as they leave. We will only remove the barricades when the civilian government is back."

The coup was the latest to have hit the poverty-stricken East African nation, which has experienced only rare democratic interludes since independence in 1956.

Shops have remained closed following calls for a civil disobedience campaign and Sudan's pro-democracy movements ratcheted up calls for "million-strong protests" on Saturday.

Prime Minister Abdalla Hamdok, who was detained by the military Monday in sweeping arrests of civilian leaders, remains under guard at his home, where he was moved after an international outcry. Other ministers remain under full military arrest.

A fire burns at a street barricaded by anti-coup protesters in the Sudanese capital Khartoum on October 27, 2021. By - (AFP)

A joint statement by the United States, European Union, Britain, Norway and other nations emphasised their continued recognition of the "prime minister and his cabinet as the constitutional leaders of the transitional government".

Burhan, a senior general during Bashir's three-decade-long hardline rule, on Wednesday also sacked six Sudanese ambassadors -- including to the US, EU, China and France -- after they sided with the civilian leaders he ousted.

Online videos shared by the SPA showed protesters chanting for "civilian rule", calling for mass protests on October 30, and demanding that Burhan be taken to Khartoum's high security Kober prison, where Bashir is incarcerated.

Violence against protesters has mounted in a "vengeful" crackdown by security forces, the SPA said in a statement.

On Wednesday, hundreds of protesters were seen throwing rocks at security forces in Khartoum's eastern district of Burri.

Military vehicles have deployed in the Sudanese capital Khartoum. By - (Anonymous/ESN/AFP)

The World Bank has put its aid on hold, a major blow to a country already in the grip of a dire economic crisis.

Sudan only recently unlocked funds from the lender and its sister institution the International Monetary Fund, after decades under sanctions during Bashir's rule.

Washington has also paused $700 million in funding, and the EU has threatened to follow suit.

A road in the Sudanese capital Khartoum barricaded by anti-coup protesters on October 27, 2021 -- security forces were clearing such blockades from major streets. By - (AFP)

The information ministry -- still loyal to the deposed government -- has warned that security forces are tightening their control of the capital.

"Neighbourhoods and streets have been blockaded by armoured vehicles and men carrying rifles," it said in a statement Wednesday, alleging also that "women were dragged" to the ground.

UN spokesman Stephane Dujarric said on Wednesday that Hamdok was still "not free" and confined to his residence, after Volker Perthes, the UN's Special Representative for Sudan, met with both the prime minister and Burhan.

US Secretary of State Antony Blinken on Wednesday spoke with Sudan's Foreign Minister Mariam al-Mahdi to "solicit her views about what steps the United States can take to support the Sudanese people in their call for a civilian-led transition to democracy", the State Department said.

The UN Security Council, however, has struggled to agree a joint statement on Sudan's crisis. Russia opposed a strong condemnation, diplomats said.

Russia's deputy representative to the UN Dmitry Polyanskiy said negotiations were continuing and described the matter as "very delicate".

Sudan had been ruled since August 2019 by a joint civilian-military council, alongside Hamdok's administration, as part of a transition to full civilian rule.

But analysts had said the civilians' role receded before the coup, which the experts view as the generals' way of maintaining their long-held grip on the country.