AG to give directive on missing Ghanaian on Chinese fishing vessel 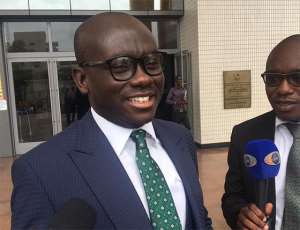 The Attorney-General’s Office in the next three weeks will give its final advice on the way forward regarding Emmanuel Essien, a fish observer, who mysteriously went missing on a Chinese fishing vessel on July 5, 2019.

Information Minister Kojo Oppong Nkrumah, who gave an update on the matter at a media briefing, in Accra, on Wednesday, said the Police had completed its investigations into the case and submitted a duplicate case docket to the Attorney-General’s Office.

The update on the case follows a petition to the Inspector-General of Police by the Information Minister earlier this year, enquiring about the status report on the matter.

The Minister said the Attorney-General’s Office further directed the Police Administration to interrogate three other persons namely; Isaac Cudjoe, Jehonu Ahiable, and Anthony Asiedu, and presented the outcome of the interrogation to the A-G’s Office.

Mr Essien went missing on a Chinese fishing vessel, Meng Xin, on July 5, 2019 when he was on fishing observer duty and has since not been found.