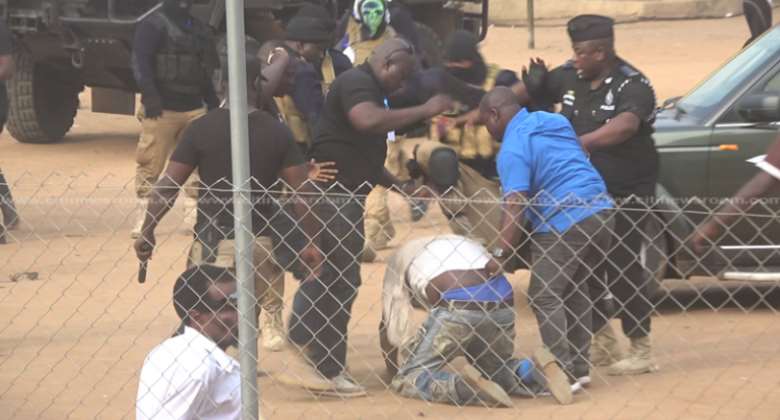 A meeting to finalise the payment of compensation packages to the victims of the Ayawaso West Wuogon By-Election Violence by the National Security Ministry was unsuccessful again.

Last week, the meeting ended abruptly after lawyers of the victims protested.

The lawyers called for the suspension of the procedure for further deliberations to allow for transparency and fairness in determining the compensation package to each victim.

One of the lawyers, Abraham Amaliba explained that more negotiations were needed to allow for transparency and fairness in determining the appropriate compensation packages.

“This has taken our clients by surprise. They were not in the know that today is going to be the day for the award of compensation. We are also concerned about how the computation of the compensation was done. We would have expected that for transparency and fairness sake, we as lawyers would have been part of the processes to see that it was fair and transparent.”

Osei Bonsu Dickson, the Head of Legal at the National Security Ministry, agreed with him and said the concerns were legitimate and would be addressed.

Mr. Dickson in a Citi News interview said a meeting will be had today, Thursday, October 28, 2021, to address the issues raised.

“We will have that engagement so that if they want to see a walkthrough, that should be fine for us. So next week [Thursday], God willing, we should have the compensations,” he said to Citi News.

“If you fail to appear, that will not stop anything. If you are awarded something, and you won't take it, that is not an issue. You have a choice, and you can take whatever action that seems best for you,” Mr. Dickson said.

However, Citi News understands that the meeting will not come off today as planned.

Our sources at the National Security indicate the matter has been referred to the office of the Attorney General.

The compensations were part of recommendations from the Emile Short Commission that probed the Ayawaso West Wuogon violence, which occurred on January 31, 2019.

On the day of the by-election, National Security personnel drove in police armoured vehicles to a polling centre at La Bawaleshie and assaulted and shot at some supporters of Delali Brempong, the candidate of the opposition National Democratic Congress.

Six persons were wounded, with others sustaining minor injuries.