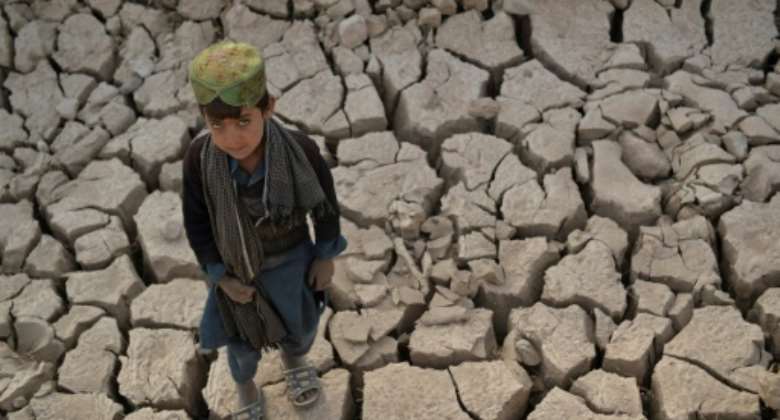 A child stands on a dry land in Bala Murghab district of Badghis province. Drought stalks the parched fields around the remote Afghan district of Bala Murghab, where climate change is proving a deadlier foe than the country's recent conflicts. By Hoshang Hashimi (AFP)

As world leaders prepare for the COP26 climate summit from October 31, AFP Fact Check examines some common claims that question the existence of global heating caused by humans.

Some brand the crisis a hoax by scientists to justify their research grants -- or even a conspiracy by governments to control people. If so, it would have to be one of extraordinary complexity, coordinated by successive governments in scores of countries with vast numbers of scientists.

Tens of thousands of peer-reviewed studies in the public domain have led to an overwhelming scientific consensus that human-made climate change is real. The most comprehensive such source is the Intergovernmental Panel on Climate Change (IPCC). Far from being a covert operation, its evidence and methods are published at www.ipcc.ch.

Its latest report, 3,500 pages long released this year, was approved by delegates from 195 states. It lists 234 authors from 66 countries as contributors.

The panel was founded under a UN resolution, which provides fuel for conspiracy theorists but offers proof of its bona fides for other people.

Scientists know the Earth has long alternated between ice ages and periods of warming -- about one ice age every 100,000 years over the past million years. Is the current heating just another stage in this cycle?

A selection of natural phenomena that could become harmful for the climate if they reach their tipping points.. By (AFP)

No -- the speed, relative abruptness and global extent of the heating over the past 50 years make it different this time.

"Global surface temperature has increased faster since 1970 than in any other 50-year period over at least the last 2,000 years," the IPCC says, with graphs to demonstrate.

This is based on several forms of data: palaeological analysis of sediment, ice and tree rings for the period before the Industrial Revolution, and recorded temperatures since 1850.

'No proof of human cause'

As evidence of unusual warming has become incontrovertible, some sceptics concede it is happening but deny it is caused by the carbon emissions from humans burning fossil fuels.

The IPCC developed a climate model that measures the impact of different factors. It calculates the extent of heating with and without the effect of human activity.

"It is unequivocal that human influence has warmed the atmosphere, ocean and land," this year's IPCC report concluded.

A summary of this finding, with graphs, is on page eight of this document: http://u.afp.com/wZ6N

'A little warming is good'

"Large parts of the Country are suffering from tremendous amounts of snow and near record-setting cold.... Wouldn't be bad to have a little of that good old fashioned Global Warming right now!"

Donald Trump's tweet on January 20 blended a common climate myth -- that cold weather is evidence against climate heating -- with the assumption that even if warming is happening, it isn't all bad.

Climate is a measure of average weather variations over time. One day or one week of snow is therefore not enough to prove that average temperatures are not rising over decades.

Could "a little global warming" be nice? Parts of Siberia could become arable, expanding food resources -- but the melting of permafrost in the same region threatens to create more problems.

A two-degree rise may sound pleasant enough - but the IPCC calculates that it is enough to drive up the level of the seas by half a metre or more, enough to drown coastal cities.

Specialists often voice scepticism, signing joint statements and editorials. But an examination of their credentials in numerous cases has revealed that these are rarely climate scientists.

Among scientists' criteria for measuring the legitimacy of claims, one of the most important is consensus -- and the consensus on climate change is now overwhelming.

A recent survey by Cornell University of thousands of peer-reviewed studies on climate change found that in more than 99 percent of them the authors agreed that climate change was caused by humans (http://u.afp.com/wZ6p).