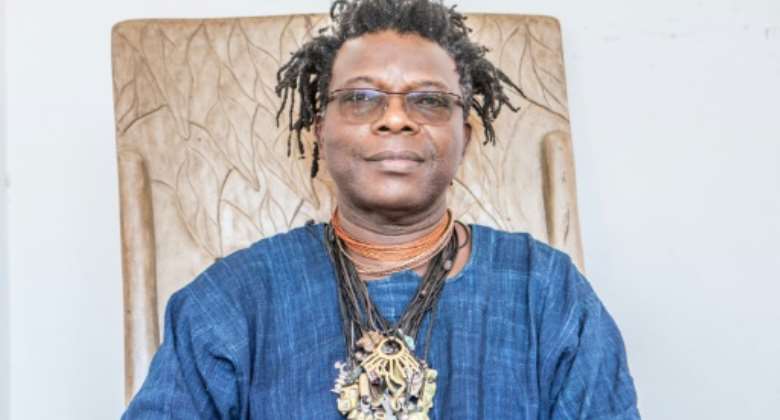 Benin artist Romuald Hazoume has drawn an international following with works that are emblematic of waste and regeneration -- masks made from recycled materials such as jerrycans, for instance.

With the UN's COP26 summit looming in Glasgow, he hopes to use this platform to sound a warning over Africa's inaction to the threat from climate change.

Climate change is "already a reality" on the continent, the 59-year-old sculptor and artist told AFP in an interview.

"Our leaders have the courage to run for office, but they lack courage when it comes to facing the reality," he said.

Political leaders who minimise or deny global warming are "absolutely irresponsible" and "in denial," said Hazoume.

"In Africa, there cannot be this hypocrisy, this bad faith, because the reality (of global warming) is already here," he said, speaking from his lush garden in Cotonou, the small coastal nation's economic capital.

Steps away from his house, on the long golden beach of Fidjrosse, known as the "fishing route", sea level rise has been an issue for several years, said the artist.

"Air and water temperatures are going up. When we look at our shoreline, we see plenty of seaweed, which wasn't the case before."

"In Benin, we have many waterways, and every year we suffer from the impact of floods (...) We have to stop heading straight into a wall," the artist said.

Countries in Africa are particularly vulnerable to climate change that also worsens food insecurity, poverty and displacement, according to a United Nations report.

If nothing changes, up to 118 million extremely poor people will be exposed to drought, floods and extreme heat by 2030, according to the UN.

"With the rise of sea levels, we have islands that will disappear. Some populations will be erased from planet earth," said Hazoume.

"We don't have a choice, it's a question of survival."

While often critical of governments, Hazoume, who has used waste in his art since the 80s, remains optimistic.

In Benin, for example, there have been improvements in waste management in the country's cities in the past five years.

"Roads are cleaned every night, and we no longer have trash clogging gutters, so that gives me hope," he said.

During the rainy season, many cities on the continent become flooded and difficult for traffic, including in neighbouring Nigeria's Lagos, the largest city in sub-Saharan Africa.

Often the most vulnerable people living in informal settlements suffer the most, and sometimes lives are lost.

But "we can succeed, with willpower," said Hazoume. "African countries can fight back, instead of always casting themselves as victims."

Five years ago, the artist attended COP22 in Marrakesh, in Morocco.

"I was meant to speak, but I was so angry, seeing what was happening, with big polluters giving lessons to smaller countries," he said.

"How many factories do we have in our small countries? The real polluters, we know who they are."

But the outspoken artist also called on individuals to assume their own responsibilities, starting with recycling at home and not throwing out litter on the streets.

"We must also recognise what we are responsible for," said Hazoume, "and not accuse others."

FIFA throws out SAFA’s protest case against Ghana after WC q...
5 minutes ago

Appropriate adequate funds for establishment of Ghana’s CDC ...
11 minutes ago