Surfers or seals all the same prey to near-blind sharks 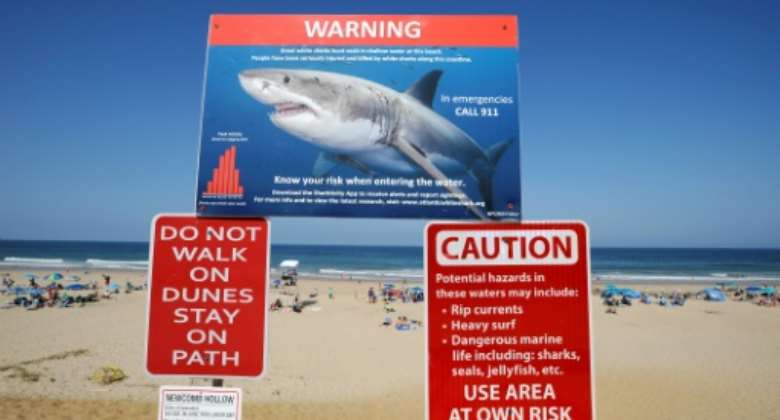 Little is known about why sharks bite humans. By Joseph Prezioso (AFP/File)

Sharks suffer such poor vision that they are unable to distinguish people surfing or swimming from animal prey like seals and walruses, according to a study published Wednesday.

White sharks have a reputation for picking up sound and smell at great distances, but at close range it was thought they relied on eyesight to catch prey.

But a new study published by the Royal Society's Interface review found that the sharks barely pick up colour and have a very poor ability to distinguish shapes.

Their vision is up to six times weaker than a human's and even worse in young white sharks.

The shark's visual system barely picks up colour and has a very poor ability to distinguish shapes. By RODGER BOSCH (AFP/File)

That means they have a hard time distinguishing between humans and aquatic carnivorous mammals, called pinnipeds.

"Motion cues of humans swimming, humans paddling surfboards and human swimmers was also similar to that of pinnipeds with their flippers abducted (out)," the study said.

The researchers found there was a bigger difference in shape between the mammals with flippers in or out than between surfers or swimmers and mammals that had their flippers out.

And one group in particular was especially vulnerable.

"As a group, surfers are at the highest risk of fatal shark bites, particularly from juvenile white sharks."

With little known about why sharks bite humans, the Australian authors of the study set out to test the theory of mistaken identity.

"This is the first study to look at the mistaken identity from the visual perspective of a white shark," lead author Laura Ryan of Macquarie University's department of biological sciences in Sydney told AFP.

Video footage of sea mammals, swimming humans and paddling surfboards was compared from the white shark's perspective, viewing the potential prey from below.

From the animal's point of view, "neither visual motion nor shape cues allow an unequivocal visual distinction" between humans and pinnipeds, the authors wrote.

White, tiger and bull sharks are the usual suspects for the majority of attacks on humans. By JOSEPH PREZIOSO (AFP/File)

With fewer than 60 shark attacks recorded globally in 2020, they remain relatively rare.

But the study found they are still frequent enough to maintain a "disproportionate" level of fear linked to ignorance about shark behaviour and particularly unprovoked attacks.

The consequences can lead to campaigns that kill not only endangered sharks, but also other non-target species.

White, tiger and bull sharks are the usual suspects for the majority of attacks on humans.

Ryan said the researchers were now working "to determine if changing the visual cues of potential prey is an effective mitigation technology to protect against white sharks.

"Greater understanding of why shark bite sometimes happen will hopefully lead to improved solutions that not only prevent shark bites but also don't endanger other marine wildlife."