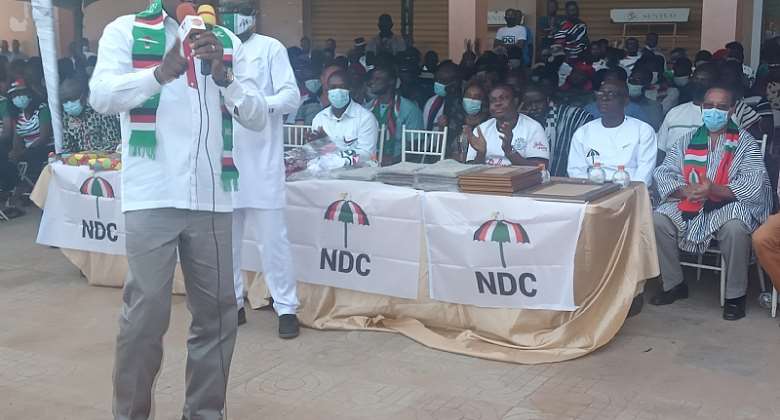 The National Chairman of the opposition National Democratic Congress (NDC), Mr. Samuel Ofosu Ampofo has assured that loyal members would henceforth be rewarded when the party comes into office in 2025.

He also called for unity among members of the party, urging them to work hard and avoid divisive tendencies in the party.

Mr Ofosu Ampofo gave the advice whilst addressing Constituency and Branch Executives as well as the teeming grassroot supporters during an award ceremony organized by the Dome Kwabenya constituency on Sunday in Accra.

The ceremony was aimed at rewarding party members who put up a good performance during the 2020 general elections.

He said the goal of defeating the New Patriotic Party (NPP) in 2024 could not be realized in a divided house.

He also hailed the positive disposition of the constituency Chairman, Mr Nii Lante Lamptey, describing him as a team player, whose effort is helping the party return to power.

Mr Ofosu Ampofo applauded the 2020 parliamentary candidate, Mrs Elikplim Akurugu, constituency executives and members for carrying out what he described as “historic” electoral performance in the 2020 elections.

He entreated the regional secretariat to be neutral in resolving grievances in order to ensure unity in the party. He pledged that the party will give the region the necessary support to wrestle power from the NPP.

He noted that the branch executives won’t be handpicked in the next branch election next year but would be elected to enable them become effective ahead of the 2024 general polls.

He added, “Right now, the NDC has a very credible and reliable database of its members, in every branch across the entire country. Our party is now a stronger and more united party as a result of the membership registration exercise.”

He emphasised that the development was an indication that the party would achieve undisputable victory in an election that is free and fair.

He admonished them to vote for competent leaders who would wrestle the seat from the NPP come 2024.

He also called on the party to abide by internal democracy and transparency to move the party forward.

The Constituency Chairman, Nii Lante Lamptey urged the members to remain loyal to the party as more of such rewards would be coming frequently.

“I want to assure you that your labour for the party would not be in vain, we will always come to appreciate your efforts because the party revolves in the grassroots,” he stated.