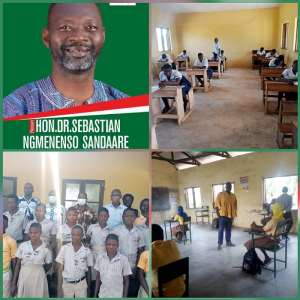 This year's mock examination for the BECE candidates has started in the Daffiama-Bussie-Issa district in the Upper West Region.

The Member of Parliament for the constituency, Hon. Sebastian Sandaare as part of his educational strategy organizes the mock to enable candidates prepare adequately for the final examination.

This year's mock started on Tuesday after it was officially commissioned by the District Director of Education, Mr. Samson Anawine Antgembero and representatives of the Member of Parliament.

At the commencement of the examination, the MP through his representative, Denis Andaban promised a special package for the best candidates (male and female) of the BECE.

He added that education is a major priority of the MP for producing quality human resources needed to contribute to the development of the area.

The team was out ensuring that the exams is effectively conducted without any challenges. While the Director of Education, Mr. Samson Anawine Antgembero and his officers, and the representative of the MP, Denis Andaban were touring some of these schools supervising, another team of the MP led by James Wor, a professional teacher who doubles as the NDC constituency secretary, was also at the Eastern part of the Constituency to monitor and ensure effective conduct of the examination.

Speaking to this reporter, the director showed his appreciation to the Member of Parliament for making the examination possible.

He added that this will help in giving adequate preparation of the candidates.

He also thank the District Assemble for supporting the Ghana Education Office in diverse ways.

He admonished teachers to put in their best to improve academic performance in the district and the Region at large.

He was optimistic that, with the commitment of his teachers, officers and stakeholders in the district, this year will be a year of difference so far as the BECE is concerned.

He finally advised candidates to stay away from any examination malpractices and strictly obey all examination regulations.

This year, in the Daffiama-Bussie-Issa district, a total of 500 candidates are to partake in the Basic Education Certificate Examination in November.