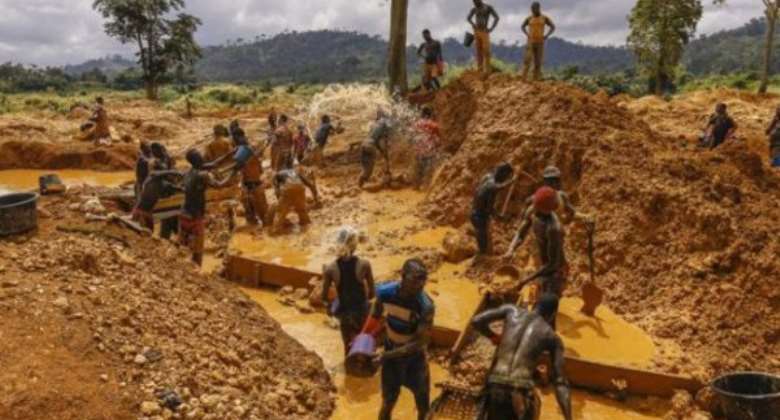 A group calling itself Friends of the Environment and Water Bodies, has expressed concern about the increasing activities of illegal mining (galamsey) along the banks of Amoaya and Subre streams in the Sefwi- Amoaya community.

According to them, illegal mining activities were destroying the two streams, which were the only source of drinking water for the people in the Amoaya community.

In a statement issued and signed by its Convener, Nana-Gyawu Asante and copied to the Ghana News Agency (GNA) in Takoradi, the group lamented that efforts to stop the illegal miners had not been successful.

"Sadly, all efforts by individuals, groups and leaders of the Sefwi- Amoaya community to stop the activities of the illegal miners have yielded no good results," the statement said.

The statement noted that though none of the miners had legal documents to mine in the area, the illegal miners claimed they had backing from some “big men” in government and therefore were unperturbed by calls for them to stop their activities.

This, it said, was despite the fact that there was a ban on illegal mining and even those with legal documents were restricted from mining in rivers and water bodies.

The statement therefore called on authorities including the Western North Regional Minister, the Bodi District Chief Executive as well as the Regional Security Council, to take immediate steps to halt such illegal activities in the area.

“We are by this notice calling on the President of the Republic, through the Ministry of Lands and Natural Resource, the Regional Minister for the Western North Region and the District Chief Executive for the Bodi District to take action against illegal miners in the Sefwi Amoaya Community”.

The statement said “Your refusal to take action against these illegal miners can result in the decision by the youth, individuals and the leaders of the community to confront the illegal miners at their sites, seize their equipment and destroy them”.