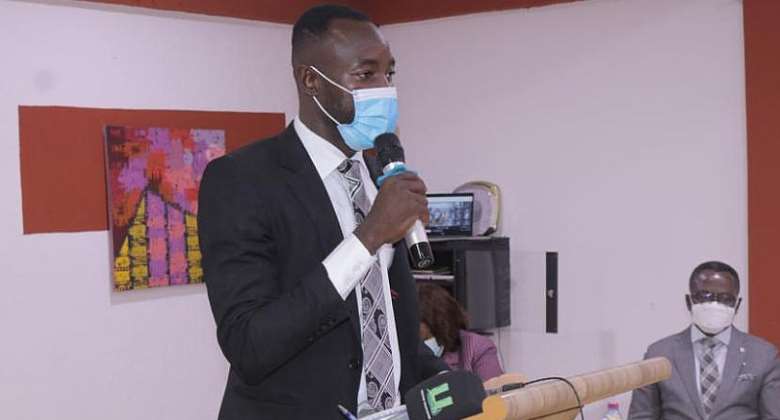 A Tamale based promising young journalist and former Sports Secretary of the Tamale Technical University, Mr. Prince Kwame Tamakloe has been selected as a Media Ambassador for the USAID Justice Sector Activity.

He is appointed together with seasoned media practitioners like Manasseh Azure Awuni, Abdul-Hayi Moomen, Johnnie Hughes and others.

Mr. Prince Kwame Tamakloe, the only Northern Journalist among the ambassadors at a short ceremony in the nation's capital expressed his delight over the appointment.

He promised to make the project fruitful especially in the five regions of the North, and however called his colleagues to support the activity.

The CTS project which is being supported by the USAID is to enable the key actors in the justice delivery system to electronically access and track the various stages of criminal cases from the point of arrest, investigations, prosecution, conviction, rehabilitation and release.

To institutionalize and sustain the effective implementation of the CTS requires civil society oversight and ‘watch dog’ role in ensuring that the system is being used and that there exists effective coordination among the six (6) key Justice Sector Institutions (JSIs) using the CTS. These JSIs are the Ghana Police Service, Ghana Prisons Service, Ministry of Justice and Attorney General`s Department, Legal Aid Commission, Economic and Organized Crime Office and Judicial Service.

To this end, the Legal Resources Centre (lead) and sub-awardees being the Commonwealth Human Rights Initiative, Africa Office and the Crime Check Foundation are the technical partners advocating for, and monitoring the utilization of the CTS by the six (6) key JSIs.

To achieve this, one of the aims of this Activity is to create CTS Media Ambassadors dedicated and committed to using their influence and following in the media space to champion the course of this Activity.

Their appointment was informed by the huge media platform they represent as well as their track record and impact as journalists.

In a brief ceremony held in Accra to unveil the ambassadors, the President of the Ghana Journalists Association Mr. Affail Monney said he is confident in the selected journalists for that role and believe they will deliver to the success of the project and the benefit of the ordinary Ghanaian.

The 2-year activity dubbed the ‘USAID Justice Sector Support Activity’ is being funded by the USAID while the Justice Sector Support (JSS) Activity which is being implemented in forty (40) target Districts in seven (7) Regions aims at ensuring that marginalized communities through mobilization and innovative public education programmes are aware of, and supported to track progress of the delivery of the CTS.

The Activity also aims to create awareness and access to justice sector services and advocate for the use of the CTS and Alternative Dispute Resolution mechanisms in resolving cases.