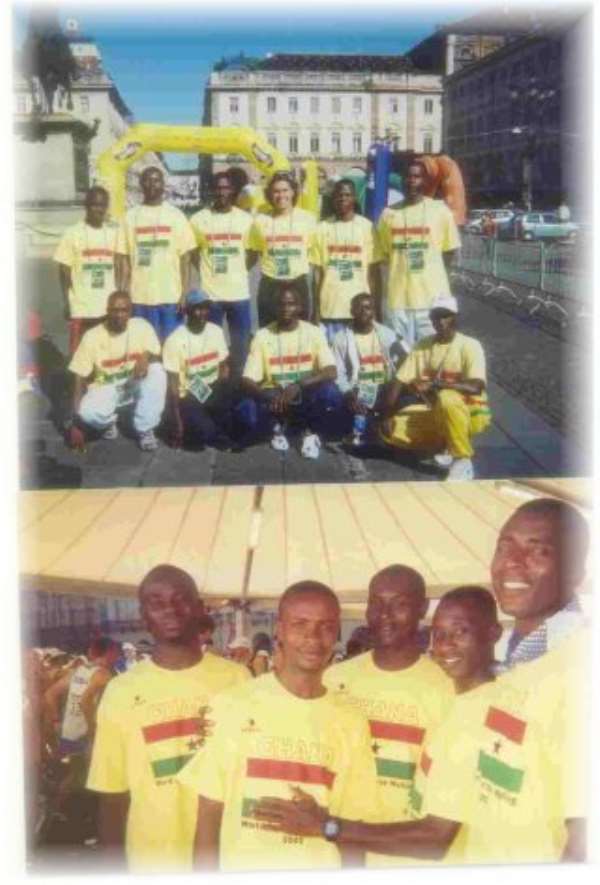 The Ghanaian contingent of walkers who made it to this year’s World Walking Cup in Turin, Italy returned last Tuesday with an Alitalia flight. They were led by the captain in the person of Vincent Asumang (Ace Walker) Assistant Division Officer of the Ghana National Fire Service and foreign coach Dave McGovern of World Class race walking in U.S.A. In an interview with Asumang on arrival, he indicated that the Ghanaian Walkers found it very tough before getting the chance to compete in the World Cup. He however said cautiously that this is not to cover up their performance, but to make Ghanaian aware of the challenges that Walkers face so that they could be in the best position to assist at all times. He added that the search for sponsorship begun last November 2001 but they still found it difficult until Alitalia, Parleys Biscuit, Energizer, Voltic Mineral Water came to their rescue. The foreign coach also sought sponsorship from a number of companies in U.S such as New Balance and even went to the extent of selling ‘T’ shirts to support the Ghana Walking Team. On the performance of the team, Asumang did say that the team had to report daily to the embassy for a week prior to their departure. They were however granted the visa in the very day that they had to fly, that was Thursday 10th October 2002, and that made it impossible for them to do the finally training and preparation for the competition. The team finally arrived in Italy on Friday 11th October aboard an Alitalia flight at 6:00 am. and went through immigration procedure then continued with a bus from Milan to Torino. They then went through accreditation after which they were told that their initial hotel (plaza) had been changed to Boston Hotel. They checked in and quickly went for a 30 minutes warm up. On the early morning of 12th October, the foreign coach (Dave McGovern) arrived from U.S. He gave his final technical advice to the team, and then presented the 20k team with Vincent Asumang as the captain, Ahmed Tijani Sanni of the Ghana Navy, Stanley Brimah of Cape Coast, Musah Muda of Ghana Institute of Engineers and lddrisu Surokaneni. At the end of the race, the result presented by organizers showed that Ahmed Tijani and Stanley Brimah did not finish the race and Vincent Asumang was also disqualified after the 20 kilometers. It was then that the coach protested and Musah Muda was given a time of 1:55:03, Ahmed Tijani Sanni was also given time of 2:03:08 and Stanley Brimah was also given time of 2:06:12 whiles Vincent Asumang was still on the disqualified list. And that got Ghana ranked 19th out of the 32 countries who participated. It was also the only African country that was ranked. Asumang re-iterated his dissatisfaction with the result and has subsequently informed the foreign coach Dave McGovern, his counterparts Albert Nukpezah, Dr. Lamptey and the Ghana Athletics Association to contact the organizers and the IAAF to check and correct the final result again. He said there is a lot of evidence to prove his point. An example was with the case of Stanley Brimah who finished the race and his transponder chip was removed and called back to compete. It was also seen that Stanley Brimah, Ahmed Tijani Sanni and Vincent Asumang were all ahead of Musah Muda through out the race who was given the best time among the Ghanaians. He also indicated that there was no such time that he was disqualified during the race and so he would be very happy if he is given the time when the last warming card was showed by the Judge. Asumang finally thank the following Parleys Biscuit, Energizer, Voltic Mineral Water, Alitalia, Savoy Hotel, Mr. Peter Kpodogbe, El-Wak Keep Fit Club, Oguaa Traditional Council, Graphic Sports, Radio Central, Exciting Rainbow Sports, ATL FM, Biriwa Beach Hotel, Ghana National Fire Service, Ghana Navy, The National Sports Council, Athletics Association, H.E. Sam Valis Akyeanu, Mr. Ernest Obeng, Dave McGovern and all U.S. Walking Clubs and walkers who donated shoes to the walkers for making it possible for the Ghanaian team to make it to the World Cup.