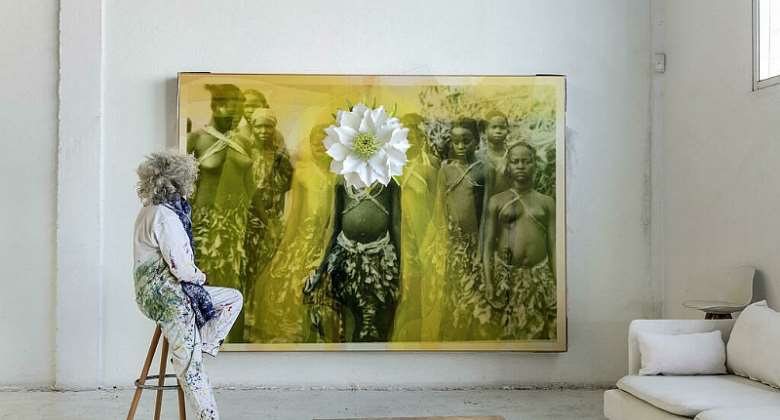 By embellishing black and white photos taken during the French colonial period in Africa, Franco-Gabonese artist Owanto invites viewers to reassess their understanding of female genital mutilation (FGM). She hopes to promote education and dialogue through culture and, little by little, "change the world".

For Owanto, it is very appropriate that her artworks be shown inside a place of justice and contemplation.

She is referring to a beautiful domed building known as the Chapel, in the courtyard of the Paul Eluard Art and History Museum in Saint-Denis, north of Paris. Her works are on display here as part of a temporary exhibition Un.e Air.e de Famille.

The eye is drawn to the words Justice De Paix – justice and peace – carved into the stone above the entrance.

The building used to belong to a 17th century Carmelite convent next door, which today houses the museum's permanent collections. In the 1800s, it was used as a courtroom.

For Owanto, the voices of those who have been silenced can finally be heard "in a place of justice". By this she means victims of FGM.

Her works Flowers and One Thousand Voices aim to change the narrative around this cruel and unnecessary practice. It's a contemporary problem she says, with a contemporary solution, and institutions, such as museums can play a key role in opening the discussion, she tells RFI.

It all began when Owanto found a tiny photograph of a young girl's circumcision, taken in 1940s colonial era in what was known as the Afrique Equatoriale française. She was shocked and disgusted.

But rather than leave it to languish, forgotten in a drawer, she decided to "make it speak" by enlarging the print and adding a large pink flower made from finely sculpted porcelain.

In creating Flowers II (La jeune fille à la fleur) she guides the viewer's attention directly to the spot that is painful to witness, turning an ugly act into something beautiful, to begin a process of healing, of compassion.

"The flower blooming her between her legs is inviting us to contemplate the world where women are going to be complete, not cut," the artist says, adding that she sees herself as a kind of facilitator, with a responsibility towards the subject.

"I never approached this subject with hostility, I was more like a mother, listening," she says, explaining that she didn't want to confront these practices forcefully, otherwise the people who carry them out will turn away and not listen.

By using art, she can soften the blow, all while carrying a powerful message: "violence against girls has to cease".

FGM harms millions of young girls and women each year. Although often associated with the African continent, the practice can be found across the globe.

It is the older women, who suffered themselves, who continue to carry out the practice on their daughters and relatives, without question. It is only through their awareness that the first steps to eradicate it can be made, Owanto says.

On the other side of the chapel, another photograph which the artist calls Ladybird (Flowers VII), also black and white, with large red porcelain flowers which cover the women's faces. It carries a more combative message of women reclaiming their territory, she says. “Fighting with flowers,” the women are taking back control of their bodies.

As well as the two large works from her Flowers series, there is an immersive sound installation developed with her daughter, journalist Katya Berger called One Thousand Voices.

This collection of audio testimonies collected from FGM survivors from 36 countries, in 24 languages, lifts the women's experiences out of the private sphere and into the public realm.

Owanto is pleased the project has been heard at conferences and in classrooms around the world, particularly on the African continent. With the Future Shakers Initiative, it has been heard by students in Nigeria, Sierra Leone, Kenya and Senegal, with more projects on the way.

Although she does not comment directly on the effects of colonialism through her works, like the other women African artists in the temporary exhibition, Owanto admits that the topic of FGM and colonialism share the common theme of domination, and the quest to control another through force.

"We cannot do nothing," she continues, admitting that this has become a project of a lifetime, and that until FGM is eradicated, one must go on educating, and raising awareness.

I want girls to wake up saying "I like being a girl" she says, hoping that all young people, men and women alike will realise the role they can play as future leaders, pushing for an end to the practice.

*Flowers II and VII and One Thousand Voices are part of the exhibition* Un.e Air.e de Famille, at the Paul Eluard Art and History Museum in Saint-Denis, north of Paris until 8 November.