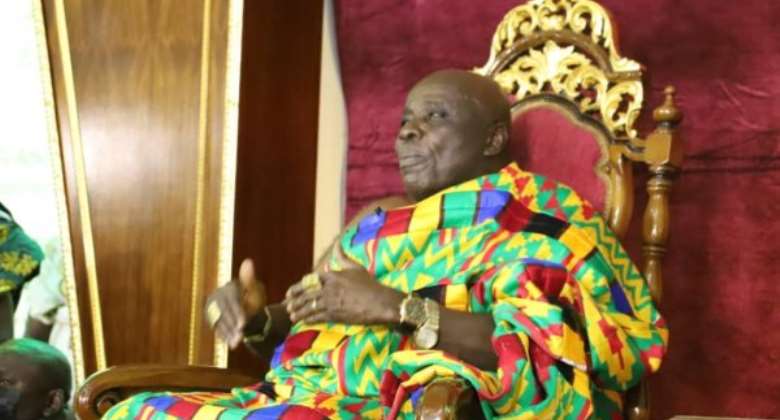 “This initiative of the Okyenhene is a laudable one, which deserves the unstinting support of all of us. Osagyefo, ayekoo!!, the President stated in a video message to the Royal Dialogue on Climate Action and the Sustainable Development Goals (SDGs) at the Ofori Panin Palace in Kyebi in the Eastern Region.

“I call on all Ghanaians to support and join in the fight against climate change. It is imperative that we join the cause, as enshrined in the SDGs, to protect, restore and promote sustainable use of terrestrial ecosystems, sustainably manage forests, combat desertification, halt and reverse land degradation, and halt biodiversity loss,” President Akufo-Addo said.

The overarching objective of the Royal Dialogue is to provide a forum for reflection and dialogue on Climate Action and the SDGs, and define collective actions at the sub-national level to accelerate progress towards the SDGs and Ghana's commitment under the Paris Agreement.

The pre-26th United Nations Climate Change conference (pre-COP26) event under the patronage of Osagyefuo Amotia Ofori Panin is being organised by the SDGs Advisory Unit, Office of the President and the Okyeman Environment Foundation.

“Climate Change is, perhaps, the biggest threat to the realisation of the SDGs, and has become an issue of grave concern to all,” the President said.

“The Intergovernmental Panel on Climate Change (IPCC) has concluded that the global community has until 2030, that is eight years from now, to stop climate change. It, therefore, requires us to deal with climate change more aggressively than we have in the past.”

He noted that acting on Climate Change must not be done in isolation; saying “it must be a co-ordinated effort, weaved into the sustainable development agenda of our various nations”.

He said the Paris Agreement and SDG Goal No 13 provided the framework for them to forge ahead in this direction.

He said though the discourse on Climate Change had different dimensions, the most important aspect of it was that majority of nations had committed to tackling it by “reducing the current global temperature to a two degrees celsius minimum, well below pre-industrial levels, and pursuing efforts to limit the temperature increase to 1.5 degrees celsius above pre-industrial levels”.

He said in Ghana, the measures put in place to deal with climate change were contained in their Co-ordinated Programme of Economic and Social Development Policies.

“We have introduced major policy interventions that have development and climate projection imperatives. Additionally, I have established an Advisory Group of prominent, private sector chief executives, who are setting up a one hundred-million-dollar SDGs Delivery Fund and a $200 million Green Fund, to complement government's efforts at tackling climate change, and funding the implementation of the SDGs,” he stated.

“Whilst we strive to do our bit to halt climate change at the national level, we expect a lot also to be done at the international level. One major issue of concern to us is the need to streamline access to international climate finance to complement national funding.”

Osagyefuo Amoatia Ofori Panin said Climate Change was a reality, and that it was affecting human lives in the areas such as agriculture, health and the environment.

He said addressing the issue of Climate Change could lead to poverty reduction and the attainment of the Sustainable Development.

Madam Harriet Thompson, the British High Commissioner to Ghana, said the moral case for climate finance which - as agreed at Copenhagen in 2009 - should reach $100 billion a year.

“In 2019, the figure still only reached $80bliion. The UK is prioritising agreements at COP that should see this figure continue to rise, and for the rich nations to pay their share.”

Dr Kwaku Afriyie, Minister of Environment, Science, Technology and Innovation, said traditional leaders did not only serve as governance authorities but also know the traditional strategies of combating the negative effects of climate change and biodiversity loss.

Dr Eugene Owusu, the Presidential Advisor on SDGs, said the time to act to address the issue of climate Change was now.