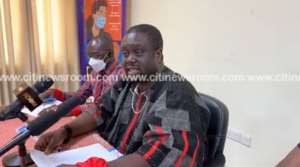 A meeting between the Employment and Labour Ministry and the Health Services Workers Union (HSWU) on Tuesday, October 26 ended inconclusively.

The meeting was to enable members of the union, the Fair Wages and Salaries Commission, the Health Ministry as well as the Controller and Accountant General's Department to address concerns raised by the workers.

The workers, on Tuesday, began, across the country, industrial action in protest of unfavourable working conditions leaving many patients stranded at public health facilities.

Speaking to Citi News, the Deputy Labour Relations Minister, Bright Wireku-Brobby, said though the meeting was inconclusive, most of the concerns members of the union raised were addressed.

He added that he was hopeful that members of the union will soon go back to work.

“Something triggered something and that is why they embarked on this action. So we met them and deliberated, and I think each side is happy and by the rules of engagement, the need to go back to their National Executive Council (NEC). Once everything is settled, they will resume work in the next couple of days and call off this strike.”

Meanwhile, leaders of the Health Services Workers' Union said they will engage their members before a decision is made.

General Secretary of the Health Services Workers' Union, Franklin Owusu Ansah in a Citi News interview insisted that their strike is still in force until negotiations are finalised.

“It is not conclusive, and we want finality on our concerns, but nonetheless, we are going back to our constituents to tell them what has transpired, but all that I can say is we have not concluded yet.”

The group is striking over what it calls poor conditions of service.

It says the government has failed to review the conditions of service of its members as agreed upon in 2016, but rather, that of their sister unions has been reviewed on two occasions.

The leadership of the HSWU says this blatant disregard for the plight of its over 40,000 members across the country has compelled them to take the decision to lay down their tools.

Addressing journalists in Accra, the General Secretary of the Health Services Workers' Union, Franklin Owusu Ansah, entreated all members to take part in the strike until they receive a favourable response from the government.

“It is not the wish of the union to cause industrial disharmony and disrupt the smooth delivery of health services, but the continuous disregard by the government to respond to our simple request has pushed us to the wall and this far.”