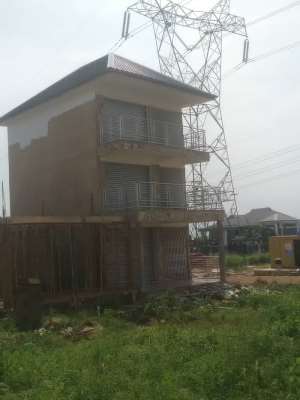 Residents and business owners in and around Oyarifa in the La Nkwantanang Municipality are calling for the demolition of a two-floor storey building which is situated very close to a High Voltage transmission line at Oyarifa-Ghana Flag Junction.

The building, this paper has gathered is a shopping mall being constructed by the Tourism Development Fund Administrator and 2020 parliamentary aspirant of the New Patriotic Party (NPP) in Agona East, Prince Yaw Essah.

According to residents and other business owners in the area, the building if completed pose serious threats to human lives considering its position under a High Voltage transmission line; hence, they are calling on the authorities to ensure that the building is demolished.

Complaints from people have led to further investigations by this paper which established that Prince Yaw Essah, who claims to be an Akufo-Addo boy allegedly, has no permit to construct the building.

It also emerged that the La Nkwantanang Municipal Assembly did not give permit for the construction of the said shop.

However, checks from the Assembly revealed that the construction of the said shop came by an “Order From Above” and there is nothing the Assembly could do to remedy the situation.

Meanwhile, one Ababio from the Works Department of the La Nkwantanang Municipal Assembly is believed to have mentioned the Regional Minister as the authority by which Prince Yaw Essah is constructing the said shop.

Speaking to the Public Relations Officer of the Assembly, he denied knowledge of the development at Oyarifa but indicated that the Works Department of the Assembly may have details of whatever is happening and will communicate to the media.

Also, speaking to Mr. Peter Amoah, an Estates Developer who sold the parcel of land to Prince Yaw Essah, he admitted selling “16 feet” space to Yaw Essah but realized that Prince Yaw Essah extended and built his shop closer to the main road.

He said, what is happening is against the Agreement he had with Prince Yaw Essah when he sold the parcel of land to him. According to Mr. Peter Amoah, as an Estates Developer he is aware of the consequences of building close to the main road hence he ensured that all his clients adhere to the tenets of their Agreement.

He also revealed that per the Agreement with his clients, their buildings must be in line with a fence wall which is already erected as a demarcation to guide whoever is building.

“But Prince Yaw Essah extended his portion and encroached the road,” he said.

When asked if he had given documents to Prince Yaw Essah after selling the parcel of land to him, he said “No.”

According to him, he decided to hold onto the documents because Prince Yaw Essah forfeited the Agreement he had with him.

“Secondly it was agreed that none of the clients will build a single storey, although they can floor the top. And when I give them the order to continue, they can. But Prince Yaw Essah also flouted that as well, by building a 2-storey building. Which is against what we agreed on,” he revealed.

Mr. Peter Amoah however wondered how Prince Yaw Essah managed to get his Permit to build when he had no documents covering the land.

A source at the Environmental Protection Agency (EPA) said the Agency could not have given permission to anyone to build close or under a High Tension transmission line.

According to the source, high voltage transmission lines are overhead power lines used for efficient bulk power transmission and that since the power needs to be transmitted over long distances, the voltage level of transmitted power is increased to reduce the current to minimize the power losses during transmission.

He said, ELF radiation from power lines is harmful to the body which can cause headache, dizziness, fatigue and insomnia and leads to hypertension, irritability, listlessness, decline in energy levels, obesity etc.

“Even while there is no scientific evidence, ELF radiation is a health hazard. Hence, it is not safe to live near power lines. That is why we are against such acts,” the source said.

Attempts to contact Prince Yaw Essah for his side proved futile as his line was off as at the time of going to press.

FIFA throws out SAFA’s protest case against Ghana after WC q...
33 minutes ago

Appropriate adequate funds for establishment of Ghana’s CDC ...
39 minutes ago