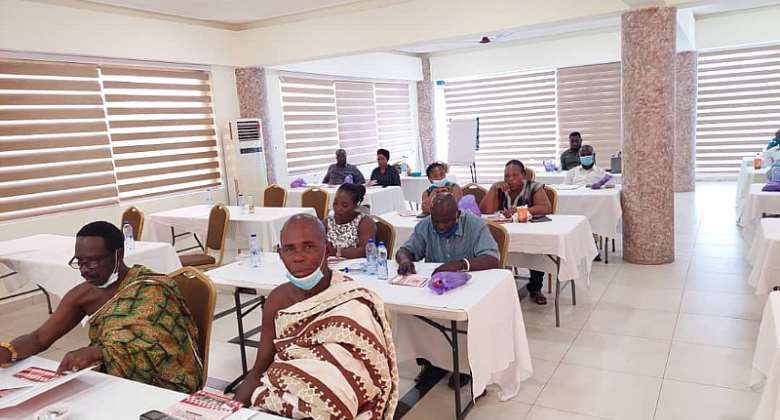 A capacity building training on Anti-Child Labour and Trafficking Legislations has been organised Cape Coast for Law enforcement agencies and community Child protection committees in some coastal areas of the Central region.

It was aimed at refreshing the minds of the participants and equipping them with the relevant laws and technical knowhow on modern trends of Trafficking.

Participants were taken through victim identification, differences between migrants smuggling and human Trafficking and human/ Child Rights protection in Ghana.

The Law enforcement agencies who participated in the training were the Ghana Immigration Service (GIS), DOVVSU and Anti-CLAT unit of the Police Service, Police CID and Community Child Protection Unit on Anti-CLaT in coastal communities from Komenda, Moree and Cape Coast.

Already, committee members from Winneba, Senya Breku and Dago have benefitted from similar training organised by Hen Mpoano, the Central and Western Fishmongers Improvement Association (CEWEFIA) and Challenging Heights, the implementing partners of the Securing Child Rights in the Fisheries Sector (SECRIFISE) Project.

The SECRIFISE Project is being carried out in the Central Region and along the Volta Lake with funding from the European Union (EU).

The three-year Project is aimed at securing child rights in the fisheries sector by galvanizing public support to eliminate child labour and trafficking (CLaT). It also seeks to implement community-based initiatives for integrating victims in mainstream society.

The training, according to Mr. Stephen Kankam, Project Coordinator of the SECRIFISE project was necessary because coastal communities in the Central Region had been identified as the hot spots and source of trafficked children especially to the Volta Lake.

The SCRIFICE project, he said among other objectives sought to support the prosecution of offenders of child trafficking.

In that regard, he said it was imperative to ensure that state agencies responsible for the prosecution had indebt understanding of all the processes of trafficking so that they could adequately deal with it.

Deputy Superintendent of Immigration (DSI) Clement Doku at the Central Regional Command, who was a facilitator spoke about the modern trends of child trafficking and what the public need to do to support the security in clamping down on the perpetrators.

He stressed the need for the security agencies as well as community leaders to collaborate effectively to ensure that the practice was halted in Ghanaian communities.

“Child trafficking is a chain, where one person’s work ends, the other partner has to start from there. Ss we need to come together as a team so that we can outweigh them. The disruptive approach is what we need in terms of combating this menace”, he said.

The Regional Director of Social Welfare, Mr. Daniel Wallace Akyeampong, highlighted how serious the issue of Child labour and Trafficking is in the region and what need to be done.

He noted that daya in day out children’s rights were being trampled upon in the case of child maintenance in that people were seriously neglecting their children and not providing for their basic needs.

He therefore admonished parents and guardians as well as the communities to help create better future for children.

The Chief Fisherman of Moree, Ofarnyi Kweiyang, spoke about the prevalence of the menace in Coastal communities and how they were dealing with it.

He stressed the need for an intensified education for parents to know and understand the limits of children so that they did not make them do a lot of work.

“I think parents need education to know the limit of the children that they are not too strong to engage in hard work that will destroy their education and future development”, he said.