By Varney Kamara, with The DayLight
Liberia 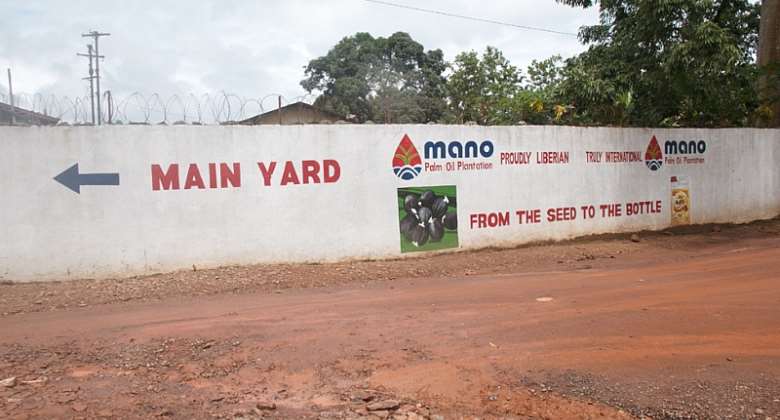 GAYAH HILL, Bomi County – In August earlier this year, a student of the Mano Plantation High School was allegedly raped by a motorcyclist while taking her to school. The biker ran away after people from a nearby village approached the place he allegedly committed the crime, according to the student whose name The DayLight has agreed not to reveal her name for fear of stigmatization.

“He covered my mouth with his right hand and dragged me in the bush, and started having sex with me,” she says in an interview with The DayLight about the incident, which took place between Karkpo Village and Gayah Hill in Zebeh Clan. A medical report from doctors at the Government Hospital in Tubmanburg, seen by The DayLight, shows injury marks on the woman’s private part.

Police in Bomi say they are investigating the incident.

The DayLight learned of the student’s ordeal and several issues related to Mano Palm Oil Industries Limited (MPOI) from our coverage of a riot in Behsao, Bomi County after police officers and the company’s guards stormed a Sande bush in search of suspected stolen palm nuts. Our investigation of that story revealed several controversies at the plantation, including its takeover from Sime Darby in 2019, indebtedness to communities and failure to implement its legally binding social responsibilities.

The Behsao riot took place in the same month as the student’s alleged rape incident. Villagers in the town—Known to produce some of Liberia’s best cultural icons, from the late Peter Ballah to Fatu Gayflor—had accused Mano of vandalizing the Sande bush. Scores of townspeople were arrested and briefly detained over the melee.

“They came and saw things they were not to see,” Senjeh District’s head Zoe Jebbeh Bigboy told The DayLight at the time. “The consequence of this is death. If we do not make sacrifices for this, people will die, including me.”

Jebbeh Bigboy, the chief Zoe of Behsao, speaks with anger after police and Mano guards ransacked a Sande bush in the area. The DayLight/Derick Snyder

Bigboy and the villagers here demand Mano makes available rice, cane juice (liquor), white sheep, red oil, and kola nuts for a sacrifice to appease the spirits of the shrine. It is considered taboo for men to enter into a Sande bush. Mano has not provided the items for the ritual, according to Konah Harris, the clan chief of the region. “We are still waiting for the company,” she says. Respect for sacred places is guaranteed under UNESCO’s 1972 Convention on the Protection of the World Cultural and Natural Heritage Framework and other international protocols such as the Universal Declaration of Human Rights (UNDHR) and the United Nations Principles on Business and Human Rights.

Mano does not take responsibility for the riot but promises to resolve the matter. “We are aware that there was a Sande’ bush incident, but we are trying to settle this matter peacefully,” says Adama Seh, its public relations manager.

The Behsao episode mirrors Mano’s failure to pay affected communities in the Garwula District of Grand Cape Mount County their cultural endowment fund the company inherited from Sime Darby. In 2014, the Roundtable on Sustainable Palm Oil (RSPO), the watchdog of the global oil palm sector, found Sime Darby guilty of destroying communities’ farmlands, ancestral graveyards, and shrines in the Manobala Clan. The RSPO report instructed Sime Darby to pay US$1 million in 60 years as compensation for the damages to affected communities. The company agreed to pay the amount in 10 six-year installments. The Malaysian company completed payment of the first installment and left portion of the second before turning over the concession. Mano paid US$66,000 of the arrears in February earlier this year as part of the second installment but owe US$32,000.

“We want the full amount of the money to be paid,” Alex Balo, Grand Cape Mount County coordinator of the National Civil Society Council of Liberia told The DayLight in a mobile interview in August. “If they cannot accept the demands of the people, we will protest and shut down the company’s operations.”

Mano insists it cannot make further payment unless a memorandum of agreement (MoA) the communities signed with Sime Darby is revisited to reflect its name. This violates Mano’s takeover deal with Sime Darby in which it pledged its readiness to handle all Sime Darby’s existing obligations to employees and local communities.

“Our first objective as a new company was for SDPL to execute liabilities to communities and employees to enable us to offer new employments with new terms and conditions and to also sign new [agreements] with communities,” Seh told The DayLight also in August, adding the new agreement would “reflect current realities and our company’s name.”

Sime Darby Plantation Bhd, the world’s largest oil palm planter, sold its palm plantation to Mano Palm Oil Industries Limited (MPOI) On 16 January last year. The company had announced the deal a month earlier due to US$35 million losses in 2018 and 2019, and pressure from environmental campaigners against deforestation. Under the deal, MPOI will pay Sime Darby Plantation Bhd in eight years in quarterly installments that will depend on the price of crude palm oil (CPO) and Mano’s production next year. Payments will begin in 2023, according to a Sime Darby statement on the deal.

The 63-year agreement, which was signed in 2009, is expected to see Mano produce crude palm oil across 220,000 hectares of land in Bomi, Gbarpolu and Grand Cape Mount counties. Mano is a wholly-owned subsidiary of Mano Manufacturing Company (MANCO), which specializes in the production of soap, bleach and detergents, has been involved in the purchase of crude palm oil and exporting it to various destinations across West Africa.

But communities did not participate in the deal, and this is fueling tension. Unlike Sime Darby, Mano has not publicly unveiled itself to locals, with townspeople saying they do not know how much the deal is worth. The Legislature was also not involved in the takeover. The company has promised to organize an event to formally unveil itself to the community but does not say when.

“Nearly everything about Mano is in secrecy,” says Winston Pyne, chairman of the Progressive Advocacy Movement (PAM), a local pressure group in Senjeh District, Bomi County. “I think the Legislature should call for a probe into how Mano really took over because there’s nothing the community knows about its board members and shareholders.”

James Otto of Sustainable Development Institute (SDI) blames the government for the stalemate at the plantation. “The government should have been more open and transparent in this process,” Ottos says. “It should have held a broad-based consultation with communities involving all the different issues because the land belongs to the communities. The government’s inaction to be transparent has created a vacuum between the company and the communities. It must do more to avoid the company mistreating the people.”

Cllr. Negbalee Warner of the Heritage Associates and Partners (HPA) says it is not illegal for communities to participate in takeovers but it is not wrong for the government to have communities involved in such deals.

Mano has also not respected the terms of its community social benefits payment in accordance with the concession agreement. Affected communities have not received that contribution for 11 years. It has failed to provide community roads, schools, clinics, and other things that it is under obligation to provide.

“We have become slaves on our own land,” says Winston Pyne of the Senjeh Development Committee.

Mano refutes this accusation, saying it cannot take responsibility for the payment. “The money is there but we have not made it available because the National Bureau of Concession (NBC) has not set up the 10-man committee that is supposed to manage this escrow account,” says Seh.

His comments are a misinterpretation of the concession agreement. The law mandates the setting up of a 10-man management team whose members must be selected by surrounding communities, the government and the company. The agreement mandates the payment of US$5 per hectare of land within the developed areas to be used for projects. Prior to the turning over of its concession to Mano, Sime Darby had already developed 10,300 hectares of land. This means that Mano owes affected communities US$566,500 for the 11 years.

Mano denies that, too.

“Mano has not presented this fund because the Legislature has not set up the management committee for us to deposit this fund,” Seh says.

Seh wrongly cites the concession agreement again. Known as the oil palm development fund (OPDF), it says Mano shall contribute one percent as its annual gross sales of oil palm products accrued at the end of each year, and that a body that comprises locals, government officials and the company. It does not specifically say lawmakers as he claims.

In Zoduah, aggrieved citizens say Mano has squashed a memorandum of understanding they signed with Sime Darby in 2009. They accused Mano of neglecting the agreement, authorized the Sime Darby at the time to acquire 5,000 hectares of land in the area in exchange for jobs, roads, clinics and schools. Those promises have not been fulfilled, a twist of fate for a community that craved for the deal back then, warning off land rights campaigners.

“The community is not gaining from this agreement,” Phillip Zoduah, spokesperson of the Zoduah Land Committee (ZLC), tells me. “Mano has pushed back everything to square one. We don’t see the roads, the schools, and health centers that it promised our people.”

Mano did not respond to queries for comment on the accusation.

“Nothing is really in place and everything is just confusing at the moment,” says Zoduah of the ZLC.

Mano says the meetings had been delayed because most of its representatives to the discussions are on administrative leave.

Back in Gaya Hill, the alleged victim blames the Mano School System for her ordeal. She had decided to take a motorcycle because the school bus did not turn out that day.

“I feel bad every day that breaks,” she tells me with a trembling voice, bowing her head. “I believe this was not going to happen to me if the bus came for us.”

Vai Kai Gray, principal of the school, understands her frustration.

“The arrangement is such that one bus takes the students from Gaya Hill to Mary Camp, and then another bus takes them from May Camp to the school’s campus but we have always had a problem with buses breaking down on the road,” says Gray. It is a sad story for a school system that was one of the best in Liberia, with 1,700 students, 121 teachers, a functional library, laboratory, and performed well in the West African exams.

“We have had cases where buses have broken down, leading to the suspension of classes for days,” Gray adds.

Mano did not respond to our request for an interview on this matter.

The police are still on their manhunt for the suspect. “The alleged rapist has not been identified,” Sgt. Samuel Patrick Kwakye, head of the women and children protection section at the police station in Gbah, tells me, “and is still on the run.”

By Varney Kamara, with The DayLight

'We will stand united to oppose e-levy' – Haruna Iddrisu but...
43 minutes ago