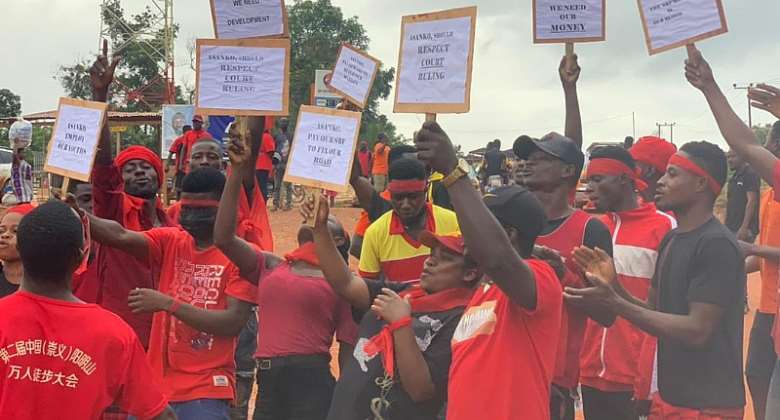 The concerned youths of Amansie South District Catchment Communities of Obtan Mining company have been given one Ultimatum to the Miners due to the failure of their social responsibility fund that the miners supposed to furnish the communities total workforce which will be using in the said contract attached to it's workforce.

According to the Convenor, Mr Peter Awere stated emphatically that, they are very aggrevied about their natural resources because from the onset of the activities of the company on our land, be accommodative on certain ill-treatment fashioned against the community members, in the anticipation things will change for better as we move along. Yet, our plight of the account of employment of indigenes, maltreatment of local employee, developmental projects and others has been deepened.

He lamented aggressively that, the 23 catchment Communities also deserves better, the youths are really suffering in our District. And it shouldn't be so, because all these communities, God has already gifted us with minerals and we cannot fold our arms just to watch someone to come and take our resources for free, Whiles, there's no jobs but rather

We also pay taxes in the country.

In order to cease existing challenge of lack of knowledge on share of the total workforce in the company by the community. The community demands that before any new contract at Obtan site, the company/sub contractors should furnish the community total workforce. It will be using in the said contract attached to it's workforce that must include various set aside for the Obtan catchment Communities. The intended action prohibited by high court that continued to say on the matter which could had led to the intended for adjudication by the same court. On the 27th July 2021, a ruling was given by the court for an account to be created with different signatories spelled out in the order. Again, the court ordered that rocords total ounce of gold sold creations of the social responsibility fund (SRL) be furnished to be interested parties communities forms part of the said parties. He disclosed..

sub -contractors are operating categories of labour given difference between local and non local employees and their various positions attached to them in (3)Three weeks time and our money must be refund to us else, the company will shut down completely.

The Director of Safety and Security for Asanko Mining company, Nana Amaoko received the petition letter and assured the demostrators that, they would hear from them soon, So he came to represented the general manager on the contrary, the petition will forward to him and they hear from them before the given date.

The group later Presented the petition to the District Chief Executive for the Amansie South District, Hon Clement Opoku Gyamfi and he also received their petition and gave them assurance that, he will proceed the petition to the Ashanti Regional Minister definitely they will hear from him soon. He again admonished them to

continue exercise patience and becareful as well so things will go on well with them at the appropriate time.

Adwoa Safo impersonation: Findings from our preliminary inve...
39 minutes ago

Acting Speaker Joewise throws out minority’s motion to overt...
54 minutes ago