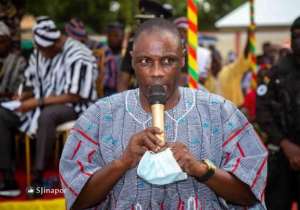 Hon. Kusubari who got a 100% endorsement from members of the West Gonja Municipal Assembly after his appointment by the President, was in attendance to familiarise himself with the local government system and all government initiatives at the local level.

The event, also afforded the MCE the opportunity to acquiant himself with all the relevant laws which will aid him work in close collaboration with traditional authorities, religious leaders, opinion leaders and other key stakeholders within his locality.

The event which is an integral component of the Ministry of Local Government, Decentralization and Rural Development, was attended by the President of the Republic, His Excellency Nana Addo Dankwa Akufo Addo who delivered the keynote speech at the orientation ceremony held for the newly confirmed MMDCE's.

In his keynote speech, President Akufo-Addo urged the MMDCE's to work with their staff to deepen transparency and accountability at the local level and avoid getting involved in unnecessary conflicts that would dent the image of the Assemblies and, by extension, Government.

"Avoid getting involved in unnecessary conflicts that rather dent the image of the Assembly and, by extension, Government. Rather, work with your staff, deepen transparency, and promote popular participation and accountability at the local level. These are the hallmarks for successful leadership and the attainment of results. If you are fruitful in this, then we would be making good progress towards strengthening the structure of our governance system and bringing democracy and progress to local government", the President stressed.

The President also admonished the MMDCE'S to be mindful of the fact that all Government initiatives at the local level come within their jurisdiction, whether initiated by them or not stressing that he will not hesitate to "disappoint" any MMDCE who does not live up to expectations.

"You have to familiarise yourself with everything, whether your making or not. A Chief Executive, who is indifferent or unaware of government activities in his or her area, is not a suitable Chief Executive. Be reminded, however, that i will not hesitate to "disappoint" any MMDCE who does not live up to expectations".

In the chain of command, he reminded the MMDCE's that the Minister for Local Government, Decentralization and Rural Development, Hon. Dan Kwaku Botwe, has oversight responsibility for decentralization implementation of local government.

He indicated that Regional Ministers are required to monitor and evaluate the performance of MMDCE's in their regions and submit periodic reports to the President about them.