US, UN target Libyan over abuse of migrants 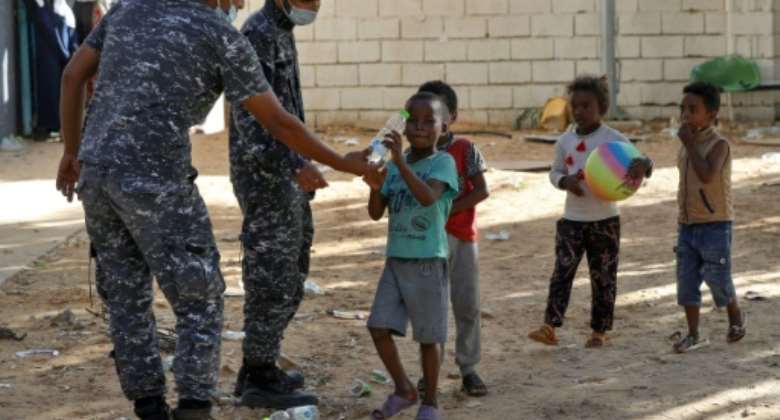 Libyan security forces hand water to children as African migrants gather at a makeshift shelter near Tripoli on October 11, 2021. By Mahmud Turkia (AFP/File)

The United States and the United Nations imposed sanctions on a Libyan accused of abuses of migrants amid growing alarm over human trafficking and inhumane conditions in the key gateway to Europe.

The United States said Tuesday it was freezing any assets and criminalizing any transactions with Osama Al Kuni Ibrahim, described as the manager of the Al-Nasr detention center in Zawiyah, some 50 kilometers (30 miles) from the capital Tripoli.

The action follows a similar designation Monday by the sanctions committee of the UN Security Council which called on all nations to ban Al Kuni from transiting through them and freeze any funds in their territory.

Human traffickers have profited from Libya's chaos since the 2011 overthrow of dictator Moamer Kadhafi, smuggling migrants into the Mediterranean in hopes of reaching Europe.

European nations led by Italy have financed the Libyan coastguard as it seizes migrants but human rights groups say that those sent back are often sent to jails mired in corrupt management and deplorable conditions.

Pope Francis on Sunday urged governments to stop sending people back to Libya, voicing sadness at the "inhumane violence" perpetrated against migrants including children.