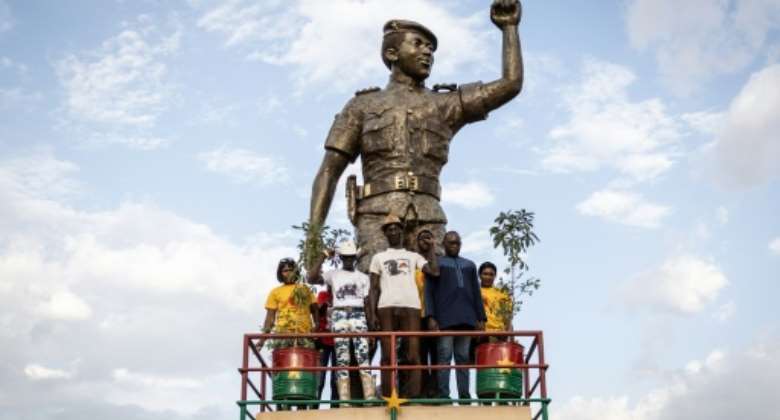 Revolutionary figure: People pose next to a statue of Sankara in Ouagadougou at ceremonies to mark the 34th anniversary of his assassination. By OLYMPIA DE MAISMONT (AFP)

A former army private admitted at a trial on Tuesday that he had helped transport a hit squad to assassinate Burkina Faso's revolutionary leader, Thomas Sankara, 34 years ago.

The trial unfolding at a military court in Ouagadougou is being closely followed by the Burkinabe public, many of whom hope it will shed light on one of their country's darkest chapters.

Fourteen people are on trial for the 1987 assassination in which Sankara and 12 others were cut down in a hail of bullets at a top government meeting.

The accused include Sankara's friend and former comrade-in-arms, Blaise Compaore, who came to power after the bloodbath.

In testimony to the court, former private Yamba Elise Ilboudo, 62, admitted a charge of complicity in endangering state security.

But he said his actions were unpremeditated -- he had not taken part in any meeting to plan the assassination, nor had he taken part in the shooting.

"We were under the orders of Hyacinthe Kafando, as head of security," Ilboudo said.

Kafando, who became chief warrant officer in Compaore's presidential guard after the coup, is alleged to have been in charge of the hit squad. He is on the run.

Compaore has always denied suspicions that he engineered the assassination and likewise is being tried in absentia.

Ilboudo said he was told by Kafando to drive to the meeting which Sankara was attended.

When they arrived, Kafando and another individual called Maiga, "who had been driving Blaise Compaore's car, got out and opened fire," he testified.

Kafando then ordered the men in the two cars to get out.

Some "went to the rear of the building where President Sankara was", Ilboudo said.

He said that he remained in the car during what happened next, and did not open fire.

Compaore ruled for 27 years before being deposed by a popular uprising in 2014 and fleeing to neighbouring Ivory Coast.

Diendere is already serving a 20-year sentence for masterminding a plot in 2015 against the transitional government that followed Compaore's ouster.

Burkina Faso has long been burdened by silence over Sankara's assassination and many are angry that the killers have gone unpunished.

Sankara, a Marxist-Leninist, was an army captain when he came to power in a coup in 1983, aged just 33.

A charismatic leader who railed against capitalism, he threw out the country's name of Upper Volta, a legacy of the French colonial era, and renamed it Burkina Faso, which means "the land of honest men".

He pushed ahead with a socialist agenda of nationalisations and banned female genital mutilation, polygamy and forced marriages.