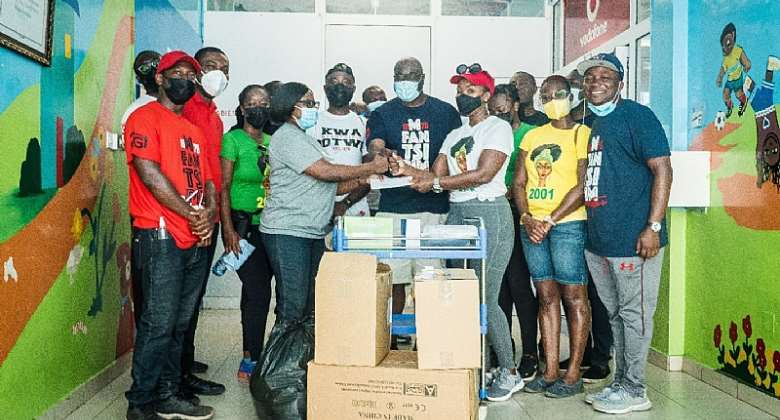 This was part of activities to commemorate their 20th Anniversary of completing their respective schools.

The health walk which was to create awareness on childhood cancers, ended at the Korle Bu Teaching Hospital where members presented medical items and cash worth GHS5,000 to support the unit. The medical items included sterile gauze, flow meters for oxygen, nasal cannulae, burettes and water for injection.

Speaking on behalf of MOBA-GEY HEY 2001, Dr Maame Tekyiwa Botchway (Gey Hey 2001) who is a Paediatric Surgeon, explained that both year groups were touched by the plight of children with cancer, hence the decision to visit and encourage them and offer their widow’s mite to support their treatment .

Kim Odum and Dr Ken Amaniampong, presidents of Gey Hey 2001 and MOBA 2001 respectively, commended the staff of the unit for their efforts to bring relief to the children and offered words of encouragement to them to keep doing their best for the young ones who are the future.

Madam Eunice Owusu, a senior Nursing Officer at the unit, received the items and thanked MOBA GEY HEY 2001 for the kind gesture and noted that the donation would go a long way to support the children who are mostly from less privileged backgrounds.

Other activities planned to commemorate the 20th Anniversary include a Joint Thanksgiving Service and a Homecoming.

Immediately withdraw your directive to Goil; it's dangerous ...
24 minutes ago