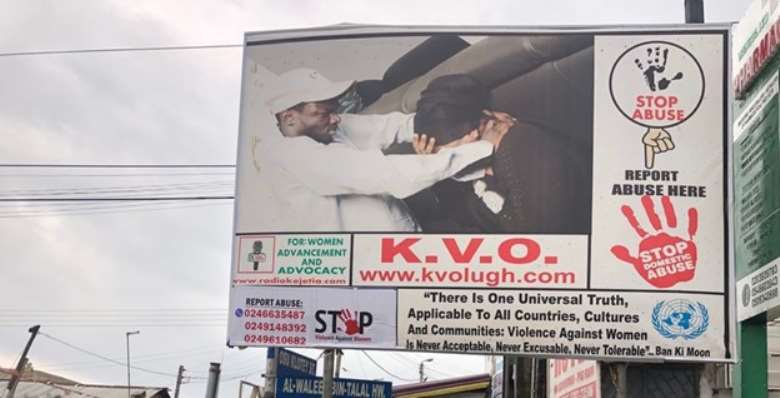 The Nima Divisional Police Command and Kunata Voluntary Organization have unveiled a billboard at Nima-Mamobi in Accra that creates awareness about domestic violence with the aim of preventing this social canker.

At a ceremony to unveil the billboard, the divisional police commander, ACP Abraham Acquaye, mentioned physical, sexual, verbal/emotional, mental/psychological, economic/financial abuses as some forms of domestic violence that must be avoided.

He urged the public to report any form of domestic abuse to the nearest police station and eschew the habit of sweeping abuses that occur in the homes under the carpet.

According to him cases of domestic violence are becoming common in society and the high cost of medical diagnosis and issuance of medical reports at public hospitals is preventing victims from seeking justice.

He explained further that domestic abuses mostly occur in poor homes where the victims are very defenseless and helpless and to require such traumatized persons to pay huge amounts for medical care amounts to a denial of victims’ rights to fairness.

Mr. Alhassan thanked a USA embassy delegation led by the director of international narcotics and law enforcement affairs, Ms. Chris Carlisle, for participating in the unveiling of the “Stop Abuse” billboard at Nima-Mamobi.

He called on civil society groups and diplomatic missions to reecho the campaign to end domestic violence and add their voices to amplify the call for free medical care to all victims of domestic violence.

In a separate development, the chief executive officer of JBC 1 Group of companies, Mr. Jibril Mohammed, has appealed to men to desist from assaulting women or their partners and rather treat them with all the love that they deserve.

He made this call during a ceremony to sponsor a documentary initiated by the Bridgewater Project against domestic abuse. JBC 1 Group also paid for two “No to Domestic Violence” billboards to be mounted at strategic locations to educate the public against beating and maltreatment of women or girls.

Speaking in the advocacy documentary program, Ms. Kristina Te Moller from Germany said every woman is precious and has a value. She added that African women are hardworking, amazing, and wonderful and they should therefore be treated well.

FIFA throws out SAFA’s protest case against Ghana after WC q...
21 minutes ago

Appropriate adequate funds for establishment of Ghana’s CDC ...
27 minutes ago