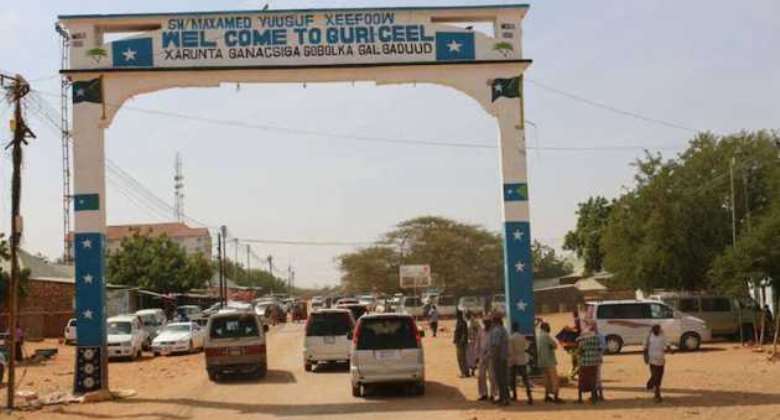 MOGADISHU. SOMALIA: At least 20 people were killed and more than 50 were sustained minor and fatal injuries on Saturday when moderate Islamist group scuffle with Somali government troops over the control of the town in central Somalia, according to eyewitnesses and regional officials.

The bloody and deadliest confrontation triggered at dawn on Saturday morning when government troops, who have been amassing on the outskirts of Guri-El, central Somali Town some 400-kilometer North of the capital, Mogadishu. Invaded bases and military garrisons held by the Ahlusunnah Wal Jama'a (ASWJ) rebels.

According to denizens, both sides used assorted and heavy artillery, mortars, machine guns and vehicle-mounted anti-aircraft guns during a fierce and internecine battle in the streets.

Speaking on condition of anonymity, military officials from opposing sides told Reporter that both sides inflicted each other with irreparable fatalities.

" I can verify that three of our soldiers were killed and more than 15 injured during the Skirmishes " Ahmed Shire Falagle, Galmudug's regional state information minister, told Reporter. I also know that a significant number of Alhusunnah Waljama'a militias were killed although I cannot give the exact number. Falagle false said Government troops ultimately took control of the town and that opposing combatants retreated after the fighting intensified; we have pushed the militias out of the town and now they are on the run, and we are pursuing them, and they are firing back from the outskirts and outlying districts and the remnants will be flushed out soon and their vestige will be obliterated he said.

But eyewitnesses who asked not to be named, identified for safety and security reasons and fears of reprisals said that government forces managed to hold control of only the police station, the district headquarters and several ASWJ buildings.

Until now the fighting is raging intermittently and remain unabated and none of the two sides is in full control of the town yet. One witness had corroborated and told Reporter we can hear heavy artillery and sporadic gunfire and shelling, the government forces are advancing and positioned at strategic bases at the heart of the town and vowed to seize and conquer the entire town of Guri-El within days, Reporter phone calls to several ASWJ officials went unresponded and both sides claimed military victory and Reporter can't ascertain that.

The federal government has long been denying the group's entity and their request to have a power as an Islamic state, saying it will pose potential security threats and concerns in the future and should peacefully seek power and share through their respective clans. It also wanted the group's militias to be disarmed, defunded disbanded and deradicalized and then be allowed to be integrated into national forces.

In February of last year, Somali troops conducted a full-scale offensive and seized and liberated towns previously held and controlled by ASWJ including Guri-El Guri-El earlier this month the Islamist Group took control and fully conquered of Guri-El unopposed and unresisted after forcing Somali government troops to withdraw immediately.

In an interview with Reporter at the time, the group's spiritual chief Sheikh Shakir and grand ideologue Sheikh Mohamud said it wants to pacify and take control of the towns and regions to better protect them and foiled attacks from Al-Shabaab extremists.

Since that tension had been building up as government troops began amassing military reinforcements near the town.

The UN, Ocha, said on Thursday over 100,000 people were coerced to flee or had been displaced in Guri-El as military build up and army maneuvering caused concerns and apprehensive atmosphere to the residents.

Political stakeholders and analysts were reluctant to mediate and conciliate the difference and squabbling and fighting became a scar festering and created doom and gloom scenario.

Leading to Saturday's bloody and cataclysmic conflagration and Somali is a country ruined by recurrent and proxy conflicts and Somalia no one is out and no well is being dug.

The full-blown battle comes two days after Somalia's president and prime minister struck a fragile and flimsy deal aimed to speed up the country's long-delayed election process and to end a simmering feud that jeopardized the fragile stability and threatened to derail and undermine the entire process of indirect election and plunge the Horn of Africa nation into fresh political, Constitutional, and humanitarian crisis.

The two men had been gridlocked over top security appointments and dismissals that were triggered by the mysterious and haphazard disappearance of female intelligence agent who has been presumed to be a live but later declared dead by the national intelligence and security agency.

Experts warn that continued political turmoil and turbulence and the renewed and recurrent conflict with the moderate Islamist group could provide a leeway and will be benefit for Al-Shabaab the tug of war and tit-for-tat allegations between Roble and Farmajo is slated to come to an end due to the deal they had struck.