'Aboboyaa' ban : 'You're overstepping your authority' – Minority to Henry Quartey 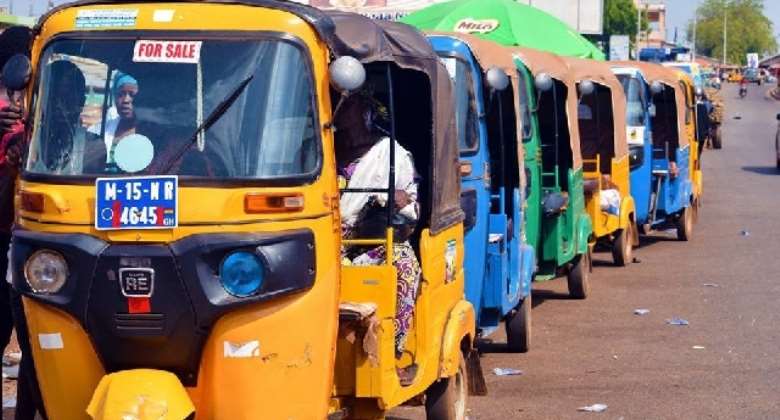 The Minority in Parliament says the Greater Accra Regional Minister Henry Quartey is overstepping his boundary with his intention to ban rickshaws (aboboyaas) on highways.

The caucus’ spokesperson on roads and transport, Mr Kwame Agbodza Governs, told journalists at a press conference on Tuesday, 26 October 20201 that Mr Quartey cannot do what he intends to do because he has no law backing his action.

The ban was first billed to take effect from November this year but has been shifted to February 2022.

The delay is to make room for more engagement, education and sensitisation to ensure a successful implementation of the directive.

At a press conference on Monday, 25 October 2021, Mr Quartery said “effective November 1, 2021, no motorised tricycle should ply the motorway."

“However, in line with the intended exercise, all motorised tricycles should keep away from all major highways and principal streets and restrict their operations to community riding by February 1, 2021,” he added.

“This three-month grace period is to ensure that proper education and sensitisation is done to ensure the successful implementation of the directive,” Mr Quartey added.

The ban is in line with road traffic regulations banning the use of tricycles.

Regulation 128 (1-4) of the Road Traffic Regulations 2012 states, inter alia: “The licensing authority shall not register a motorcycle to carry a fare-paying passenger.”

The regional minister observed that most of the tricycles were used for refuse collection activities but had no proper disposing mechanisms.

Due to that, he said, most of them ended up dumping the refuse along principal streets, thereby adding to the already existing unsanitary situation in the region.

That, he said, had brought about the need for the implementation of a policy that would regulate their activities.

However, in order not to create a situation that would lead to unemployment, he said, waste management companies had been contacted to have transfer sites in their respective assemblies to enable the tricycles to continue to operate.

In line with that, he said, the GARCC was liaising with the Driver and Vehicle Licensing Authority (DVLA) to set up zonal registration centres in the assemblies to register all tricycles in the region.

“All users of aboboyaa will be registered in their respective assemblies. They will be given riders’ licences, while their tricycles will be insured. The assemblies will also provide them with business operating permits”.

“We are allowing a grace period of almost 90 days for all these processes to be completed, while we embark on a massive sensitisation programme so that we can ensure strict compliance when the directive is implemented,” Mr Quartey said.

However, Mr Governs insists Mr Quartey is not tackling the roots of the problem.

“Indeed, in my estimation, the biggest problem on our road today is the nature of the road itself, not the road users alone. The biggest problem on Ghana’s roads today is the nature of the road – bad, bigger potholes, not enough roads, some of the road capacities have been exceeded; like the motorway and other things. So, if we want to actually have a holistic solution to his, we should be doing a combination of things: the roads must be in their condition before you can enforce the laws on them. If you have a road without proper signage or road furniture, how are you going to blame somebody if the person doesn’t know what the speed limit on the particular road is?”

“With the specific issue about my colleague suggesting that at a point in time next year, they are not going to allow ‘aboboyaa’ – tricycles that carry, especially refuse from households and other things and attempt to take them to Tema, where the recycling plant is. My brothers and sisters, you are aware the reasons the aboboyaa are doing that is because that is where the treatment plant is. We don’t have a treatment plant within Accra itself, so, if you see them on the highway going to Tema, it’s simply because there’s no other way they can dump it, so, if the minister says somewhere next year, they are going to stop them, let him be aware: he’s overstepping the authority under his watch”, he added.

According to the opposition MP, “there’s no law in this country that gives power to a regional minister to determine which vehicles drive on which roads. That is within the purview of the National Road Safety Authority and the Ministry of Roads and Transport. The only way you should believe what the regional minister is saying is if he can quote a law that backs it. District Assemblies and regional coordinating councils can’t make a law and say vehicles cannot drive on a particular road”.

Indeed, he noted: “I would have expected that we could even have a cycle lane along the motorway so [that] somebody who lives in Tema, who likes biking can ride a motorbike or bicycle from Tema to Accra. We don’t have that one now. That is what we need to be looking at at the moment”.

“So, for the regional minister to say that they are going to ban the use of tricycles, I tell him: while you have a reason, you are just like treating malaria with paracetamol. The real cause is that the person has got malaria in his body and painkillers don’t cure malaria. You need to treat the malaria itself and the pain will go”, he observed.

“Currently, there’s no law that gives the regional minister the right to say that we are going to ban aboboyaa from using the motorway”, Mr Governs said.