Desist from faking kidnapping to avoid imprisonment – Police to public 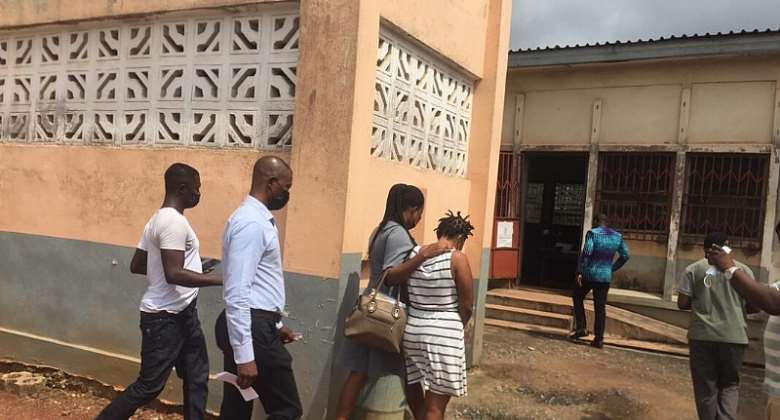 The Ghana Police Service has advised the general public to desist from faking kidnaping to avoid imprisonment.

The Takoradi Habour Circuit Court A has today sentenced the lady who joked with her kidnapping to demand ransom from her adopted father has been sentenced to six years in prison with hard labour.

The convict, identified as Joana Krah was in Court today after she gave herself up on Saturday, October 23, after two of her accomplices Susan Awortwe and Francis Eshun had been arrested.

In an explanation to the police, she said she only jokingly feigned her kidnapping on Friday, October 22.

Arraigned before court today, Joana Krah has pleaded guilty to two counts; deceiving a public officer and the publication of false news with intent to cause fear and panic.

However, in a show of mercy for her remorse and the fact that she has a three-year-old daughter, Joan Krah has been asked to serve only six years in prison.

Her adopted father who he demanded a GHS5,000 ransom from after faking the kidnapping, Evangelist Francis Nyambo has been given custody of the three-year-old child.

In a statement from the Ghana Police Service, it has advised that the public takes lessons from Joana Krah's issue.

Latest Photo Reports
Catch up with all the political quotes from our politicians.
Advertise here
More Social News
ModernGhana Links
Rise to resist oppressive E-Levy just as is stated in the national anthem — CFELAG to Ghanaians
Nigeria added to UK travel red list over Omicron variant
Shatta Wale, Medikal to reappear in court on Tuesday
We won't display faces of suspected criminals anymore – Police
Slow pace of work at the Essipon Sports Stadium worrying – Residents
Mob attacks police for preventing lynching of murder suspect at Wassa Pewuako
National Peace Council calls for truce over 2022 budget brouhaha
Security guard killed at Chorkor
You can be dragged to court for makking too much noise during sex — Lawyer
TOP STORIES

Park your car if you don't want to be vaccinated — Dr John N...
21 minutes ago