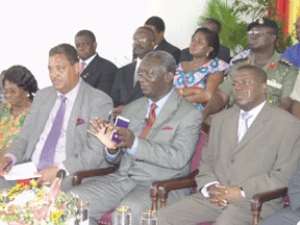 plus another 5 to be determined by each President in accordance with his vision and priorities but never to exceed a total of 20. Moreover, this shall be his cabinet. Article 78 (1) requires that majority of the ministers of state shall come from parliament. This is a problematic clause and is compounded by the fact that the whole chapter 8 of the constitution is entrenched. Thus, it cannot be amended without significant difficulty and cost. To meet the restriction of 78 (1), each Minister will have an MP as his deputy. The MP’s function is to be the liaison between the ministry and the parliament. No full minister shall be a parliamentarian at the same time. Those who are appointed ministers should resign their seat or decline the appointment. Each minister should create departments consistent with the president’s vision and the funds appropriated to that sector. For instance, a department of lands, department of forestry, etc., can be created under the Ministry of the environment. The directors and career civil servants will effectively run the departments in accordance with the policy objectives articulated by the sector ministers. At the end of every year, each minister will give a full accounting of his year to the president (directors to the sector minister, etc). The liaison in parliament shall do the same to the parliamentary oversight committee for that ministry. Non-performing ministers should be fired and given a full year's paid registration to SIL, the Ghanaian Internet chat room, which abounds with free ideas. The President can also have 5 key staff members, and their supporting staff, in the castle: Chief of Staff; Press Secretary; National Security Advisor; Legal Counsel and Special Assistant. But that is it! Currently because of 78 (1), various MPs have been appointed as regional ministers, a situation which is untenable. For instance, my childhood physician, Dr. Osafo Mensah is the MP for Mpraeso (for which, he is supposed to be based in Accra) as well as the Eastern Regional Minister (for which, he is supposed to be based in Koforidua). But this is an avoidable problem because regional ministers and their deputies are appointed under article 256 (1), which is not an entrenched provision. This article can be amended so that these appointees are designated as governors or some other title that removes them from the scope of article 78 (1). Given the state of transportation and communication in Ghana, No PARLIAMENTARIAN should ever be a regional or deputy regional minister. This issue begs for resolution and the President and Parliament must attend to it immediately. My purpose here is to take up the president’s call for a debate on this important question. I hope many more will take part in the debate and all the views will shape whatever solutions emerge.