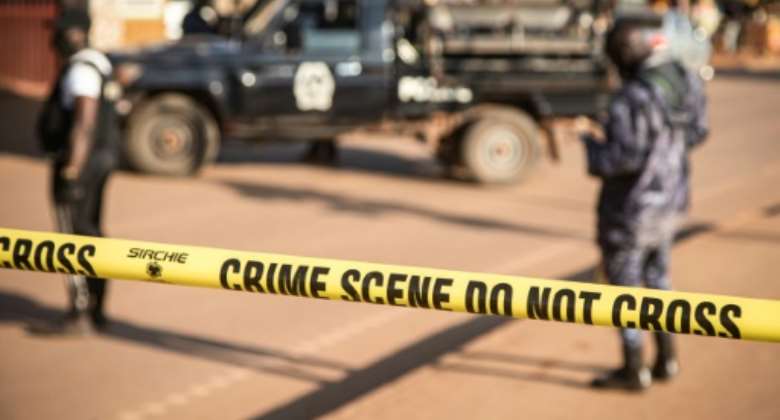 Ugandan police secure the site of a deadly bombing Saturday in the capital Kampala.. By Badru KATUMBA (AFP)

At least one person died and several were wounded in an explosion on Monday on a bus near the Ugandan capital Kampala, police said, as President Yoweri Museveni suggested it was caused by a bomb.

Another explosion in the capital on Saturday killed one person and injured three others, which police called an "act of domestic terror" and for which the Islamic State group claimed responsibility.

He said in a statement that two people had died, but the police later tweeted a correction, saying that one person had been killed.

Enanga said several people had been injured and they were being evacuated from the area.

"The scene has been cordoned off pending a thorough assessment and investigation by the bomb experts," he said.

Enanga gave no more detail on the suspected causes of the explosion.

Museveni suggested earlier that the fatality could have been a person handling a bomb.

"The Police are investigating whether the person blown up was the one carrying the bomb or not," the president tweeted.

"Preliminary reports say that the blast was from the seat and it killed only that person and injured the one who was sitting behind," he said.

"The remaining 37 other passengers were safe plus the driver," Museveni said.

Lungala is about 35 kilometres (22 miles) west of Kampala, on one of the country's busiest roads linking Uganda with Tanzania, Rwanda, Burundi and the Democratic Republic of Congo.

Investigators said a 20-year-old woman was killed and three others injured in Saturday evening's explosion at a popular roadside eatery.

The police said it was an explosive device containing nails and pieces of metal, covered by a plastic bag.

Police said the crude bomb left underneath a table indicated the work of an unsophisticated local outfit, and played down any connection to foreign networks.

However, in a message sent via its communication channels, the Islamic State's Central Africa Province said it carried out the attack, and claimed it killed two people and injured five.

"A security detachment from the soldiers of the Caliphate was able to detonate an explosive device inside a tavern in which elements and spies for the Crusader Ugandan army were gathered," read part of the statement quoted by the SITE Intelligence Group, which monitors militant communications.

On October 8, IS claimed its first attack in Uganda, alleging a unit from the same Central Africa operation bombed a police post in Kampala that resulted in injuries.

However in the following days, both Britain and France updated their travel advice, saying terrorists were "very likely to try and carry out attacks in Uganda" and urging vigilance in crowded areas.

Ugandan President Yoweri Museveni said a deadly explosion in the capital Kampala on Saturday was "a terrorist act" and vowed to hunt down those responsible.. By Badru KATUMBA (AFP)

The attack, the first outside Somalia by Al-Shabaab, was seen as revenge for Uganda sending troops to the war-torn country as part of an African Union mission to confront the insurgents.

Museveni on Sunday vowed that those responsible for the attack the previous evening would be caught and expressed condolences to those killed and injured.

Set aside the purported rejection of 2022 budget - Majority ...
7 minutes ago

Xavier Sosu fights back, files for stay of execution against...
7 minutes ago