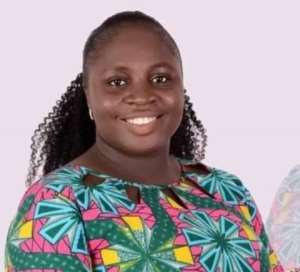 A 29-year-old Assembly Member for Ahuroso/Odumasi Electoral Area in Agona Kwanyarko, Hon. Janet Odei Paintsil has been confirmed as the District Chief Executive for Agona East.

She pulled 25 out of 30 valid votes cast to confirm her nomination.

She was subsequently sworn into office by the Agona Swedru District Magistrate, His Worship Justice Isaac Appietu.

In her acceptance speech, Hon. Janet Odei Paintsil pledged to work assiduously towards infrastructure development in the Agona East District.

"Am extremely grateful to His Excellency Nana Addo Dankwa Akufo Addo for my nomination and the confidence imposed in me. Am equally grateful to my Honourable Assembly Members for confirming me. This unity should propel us for what is ahead of us as Assembly.

"The tasks before me is huge but I have accepted the challenge to ensure the development of Agona East District.

"We must come together as a team to do what we all wished for our beloved District. I know with support from Nananom opinion leaders and stakeholders we will achieve our set target aimed at improving the quality lives of our people," she stated.

Hon. Janet Odei Paintsil said she was going to run an opened door administration and therefore called for all hands on deck devoid of partisan politics.

"Am going to use my experience as an Assembly Member to give out my Best. There is also the need for me to consult with Nananom, Assembly Members as well as stakeholders to expand social amenities to our Communities.

"As the first female to occupy the seat as DCE for Agona East, I pledged not to disappoint the good people in Agona East but will seek counselling and guidance from especially Nananom, my Regional and Constituency Executives to implement NPP Government's programmes and policies," she emphasised.

He added that he worked closely with Hon. Janet Odei Paintsil when she was an Assembly Member during his term as DCE and knows her capacity.

"She is best positioned to be DCE. I have High hopes that she will deliver," he stated.