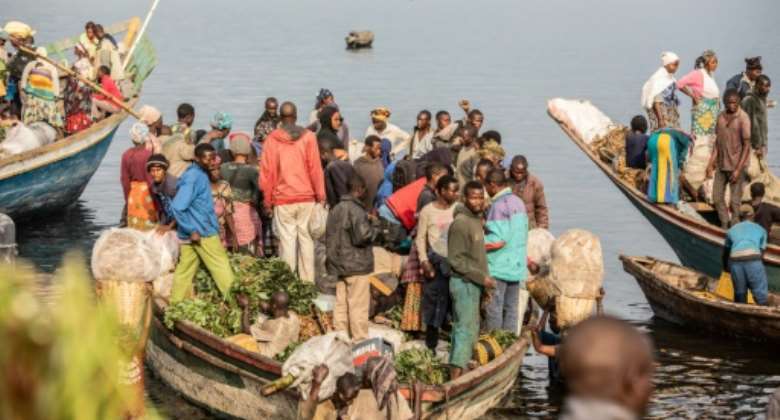 Goma and Bukavu, present a daily ballet of large motorised canoes crammed with people and goods, often in defiance of the safety rules known to all shipowners. By MOSES SAWASAWA (AFP)

Wedged between bags of cassava and bunches of bananas loaded aboard the canoes docking in Goma and Bukavu at opposite ends of Lake Kivu, passengers thank heaven for a safe voyage.

The large lake, straddling the border of the Democratic Republic of Congo with Rwanda, is one of many waterways in constant use in the vast country, where shipwrecks are only too frequent.

The provincial capitals of North Kivu and South Kivu, Goma and Bukavu, present a daily ballet of large motorised canoes crammed with people and goods, often in defiance of the safety rules known to all shipowners.

"Everything went well," Jeannine Mutangi, a passenger from the Buzi-Bulenga peninsula, said one Monday morning at the Kituku port in Goma. "But last Sunday we capsized, there were deaths," she added.

In changeable weather with rain and violent thunderstorms and waves slamming the hulls of perilously overloaded wooden boats, the human and material toll from shipwrecks is heavy.

The large lake, straddling the border of DR Congo with Rwanda, is one of many waterways in constant use in the vast country, where shipwrecks are only too frequent. By MOSES SAWASAWA (AFP)

In his small office near Bukavu's Muhanzi Beach, where the canoes known as "boats" come to dock, Dido Balume Munihire, the "lake commissioner", lists the security measures decreed by the authorities.

These include a "ban for wooden boats to navigate at night because they have no signal lights" and the "compulsory wearing of life jackets".

But in canoes loaded with food from the villages bordering the lake, which is nearly 90 kilometres (56 miles) long, and from the large island of Idjwi located in its centre, standard orange life jackets are very rare.

Shipowners will tell you openly that they needed to sail from 10:00 pm to be able to unload their cargo at 6:00 or 7:00 am, to supply the markets of the provincial capitals with fruit, vegetables, small fry, chickens and turkeys, charcoal and sundry materials.

"A life jacket costs $25 (21.5 euros), I ordered 20," said Mapendano Fandiri, 38, a shipowner in Idjwi. "But we cannot pass on the price of life jackets in the fares for transport. People do not want to pay more."

In bad weather the human toll from shipwrecks can be heavy. By MOSES SAWASAWA (AFP)

"It's cheaper by boat, but anyway there is no boat, so we have no choice," said Jean Hazihishe, 44, who came to shop in Goma from Kalehe territory, where a shipwreck claimed around 100 lives in April 2019.

President Felix Tshisekedi, who visited bereaved families, had "promised boats," but still none had come, added Mazihishe, a family man. The head of state also promised the rehabilitation of four ports on the shores of the lake. Provincial authorities recently welcomed a start to the work in Kalehe.

Commissioner Dido seemed convinced that "the lakeside population does not want to travel by boat", considering this a matter of price and habit. People are also reluctant to wear life jackets, he said.

"We are doing awareness campaigns, but nothing helps," he explained. "We now want to move up a gear. We are going to the prosecutors to file a suit against shipowners who do not want to comply."

However, the authorities and security services claiming to be in charge are numerous, leading to friction over jurisdiction among lake police, naval forces, the migration directorate, the national intelligence agency and other bodies.

Some regulars accustomed to the noisy morning crush in Bukavu counted "up to 23 services" which "hassle" shipowners, traders and travellers to varying degrees, when there should not be more than four or five.

"We're in difficulty, because there comes a time when another service handicaps our mission," said a lake police officer who asked not to be named but helplessly observed that the conflict was detrimental to law enforcement.

The bribe in the right hands also plays its role, leading to the overlooking of a dangerously heavy cargo, the lack of night navigation lights and the absence of life jackets.