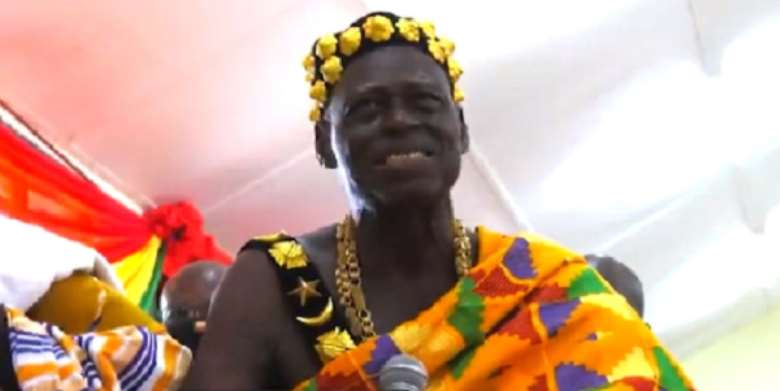 The President of the Oti Regional House of Chiefs, Nana Mprah Besemuna III, has said Nana Chadere, a Challah Chief's address during former President John Dramani Mahama's tour recently was not on behalf of the House.

He said Nana Kanawo Chadere was not a member of the House and could not have spoken on its behalf nor his comments be attributed to the House.

The President of the House of Chiefs, who doubles as Krachiwura in a press conference Sunday, distanced the House from the comments of Nana Chadere, who he described as not their spokesman.

Nana Chadere in his remarks during a "Thank you" tour by the former President on October 19, stated that Mr Mahama's visit was a prelude to the "bigger votes" from the people of the Region in 2024.

In a related development, the New Patriotic Party (NPP) in the Oti Region, following the Chief's remarks also held a press conference denouncing the membership of the traditional ruler of the region's House of Chiefs.

Mr Seidu Musah, Regional Communication Director of the Party in the Region, at Dambai, alleged that Nana Chadere was “one of the pro-NDC chiefs” who was given a Navara pick-up with registration number GE-6309-16 in the build-up to the 2016 general elections.

He said, the Regional House of Chiefs made up of Paramount Chiefs who had fully participated in the maiden conference that saw the election of Krachi-Wura, Nana Mprah Besemuna III, as its President.

The Director noted that Nana Chadere's wish for the former President to become a Head of State after the 2024 general elections so he (Chadere) would be elevated to the status of a Paramount Chief, would not materialise.

He said the statement of the traditional ruler that the former President had the highest votes cast in the region was not true, adding that Mr Mahama and the National Democratic Congress (NDC) were yet to collate their polling station results.

Mr Musah said Ghanaians overwhelmingly rejected Mr Mahama and the NDC in both 2016 and 2020 and would continue to reject him anytime he contested.

He said the creation of the Oti Region by President Nana Addo Dankwa Akufo-Addo, when all government in the past 50 years failed to listen to them was enough for the people within the enclave to show appreciation to the NPP government.

Mr Musah said the Party wished to remind Nana Chadere that Mr Mahama “drove on the first ever asphalt road in Oti” constructed by President Akufo-Addo during his “Thank you” tour to the region.