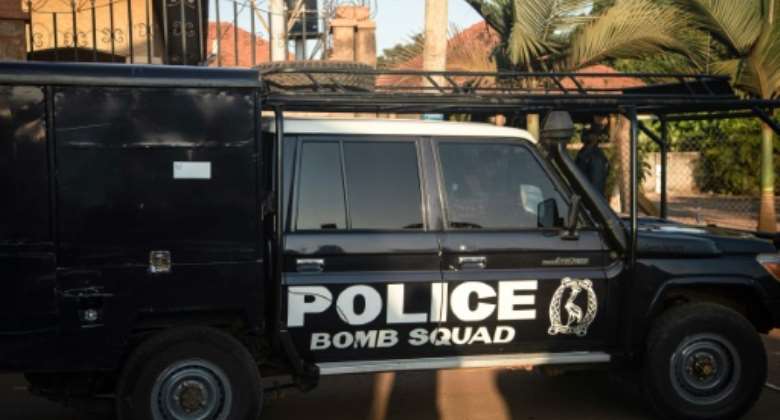 A bomb exploded at a restaurant in northern Kampala on Saturday evening, killing one person and injuring three. By Badru KATUMBA (AFP)

The Islamic State (IS) group on Monday claimed responsibility for a deadly bombing at a restaurant in Uganda at the weekend that police called an 'act of domestic terrorism'.

Investigators said a 20-year-old woman was killed and three others injured in a blast at a popular roadside eatery in northern Kampala on Saturday evening.

Police said the crude bomb left underneath a table indicated the work of an unsophisticated local outfit, and played down any connection to foreign networks.

However in a message sent via its communication channels, the Islamic State's Central Africa Province said it carried out the attack, and claimed it killed two people and injured five.

"A security detachment from the soldiers of the Caliphate was able to detonate an explosive device inside a tavern in which elements and spies for the Crusader Ugandan army were gathered," read part of the statement quoted by the SITE Intelligence Group, which monitors militant communications.

On October 8, IS claimed its first attack in Uganda, alleging a unit from the same Central Africa operation bombed a police post in Kampala that resulted in injuries.

However in the following days, both Britain and France updated their travel advice, saying terrorists were "very likely to try and carry out attacks in Uganda" and urging vigilance in crowded areas.

The attack, the first outside Somalia by Al-Shabaab, was seen as revenge for Uganda sending troops to the war-torn country as part of an African Union mission to confront the insurgents.

President Yoweri Museveni on Sunday vowed that those responsible for the latest attack would be caught and expressed condolences to those killed and injured.