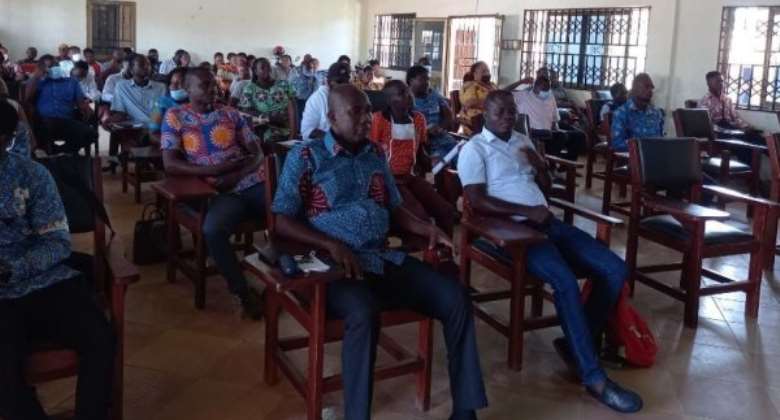 Personnel of the Nation Builders Corps (NABCO) in the Hohoe Municipality, have appealed to government to engage them with permanent jobs as the three-year programme gets to an end.

They also commended the government for the opportunity they were given for the past years they were engaged at various decentralised institutions.

Mr Jonathan Nyagblordzro, a trainee who highlighted the 'highs and lows' moment during their engagement as personnel, noted that the opportunity given to about 100,000 youth nationwide under the programme, exposed them to the public sector working environment.

He spoke during a short ceremony to show appreciation to their Municipal Coordinator and added that as a result of the opportunity they had, a lot of them had gained various forms of experiences from the institutions they were posted to.

Mr Nyagblordzro noted that despite the 'highs', the delay in stipends at times was a challenge to them, adding that, the failure on part of some institutions to appreciate the efforts of the personnel who served under them was also worrying.

He said he was grateful to the NPP government for the opportunity given the youth to serve the nation as nation builders.

Mr Apoenchi said it was not true that personnel were being asked to leave the various institutions they were posted to, but the permanency was on the way and there was no way the President would not deliver on his promise.

The personnel presented a citation and a deep freezer to the Municipal Coordinator.

Mr Daniel Noble Yao Awumey, the Hohoe Municipal Chief Executive (MCE), noted that the government was working so hard to see how all the personnel could be engaged.

He said he would take it upon himself to see how best the programme could work for the good of all while urging the personnel to be grateful if the programme is extended.

The MCE noted that the personnel had in diverse ways contributed to the success of the nation with their innovative ideas and looked forward to proposals from them as start-up businesses.

Mr. Makafui Hodanu, Hohoe Municipal Manager, Ghana Enterprise Agency (GEA), noted that the personnel might have built on their confidence, got a skill and developed themselves in general.

He urged them to look for viable and available products they could market and sell to gain profits.

The Government of Ghana in 2018 initiated the NABCO programme with seven modules which engaged about 100,000 youth to address graduate unemployment and solve social problems.

The focus of the initiative was to solve public service delivery in health, education, agriculture, technology, governance and drive revenue mobilisation and collection.

COVID-19: Government to announce more measures ahead of Chri...
22 minutes ago