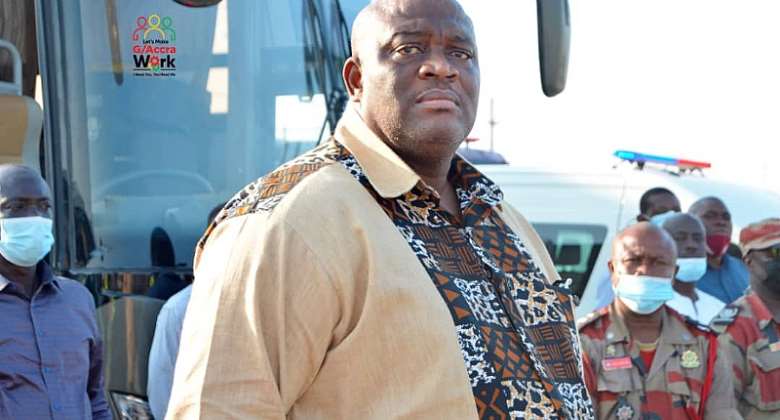 The Greater Accra Regional Minister, Henry Quartey has explained that he was reluctant to accept his appointment from President Akufo-Addo because he preferred to be in the security sector.

President Akufo-Addo in an interview with Peace FM last week disclosed that the Minister wanted to turn down his appointment and he had to convince him to accept.

Speaking to Joy News after the revelation, Henry Quartey has opened up on why he dragged his feet.

According to him, he was enjoying his stay at the National Security and hoped he would be allowed to stay there.

“Naturally, I love being in the security areas so I was hoping that I will be maintained there [National Security].

“So when Mr President called me to inform me about my new position I said ‘Oh, I thought that you were going to leave me there,’ and he said ‘No, this is what I have for you,’ So I accepted it,” the Greater Accra Regional Minister said on Sunday.

Henry Quartey continued, “I am here to serve, it is not what I want. But the President is the coach; he has a formula and he knows which player to play a particular role to suit the main plan that he has so when he said ‘Regional Minister’, I said ‘Yes sir’.”

Since accepting the new job, Mr. Quartey has earned the admiration of some Ghanaian with his campaign to get the city clean.

According to the Accra Regional Minister, in the midst of the many criticisms, he is motivated by the praise from the section of the public that supports his work.

“We are doing this for God and country, I am not really expecting anything from it so every day I see it as a new day and a new challenge and we deal with it as it comes.

“We get more commendation from the public rather than those who criticize us so it motivates and strengthens us to continue and that is what we do every day,” Henry Quartey added.

Hottest Photo Reports
Catch up with all the political quotes from our politicians.
Advertise here
More from Politics
ModernGhana Links
Practical reforms is needed in the public sector — Nana Kay
Prioritise interest of Ghanaians over your obsession to stick to power – Fiifi Kwetey to Gov’t
Founders’ Day: 'Crazy' Kwesi Pratt is 'insane' for kicking against celebration of J.B Danquah
TOP STORIES