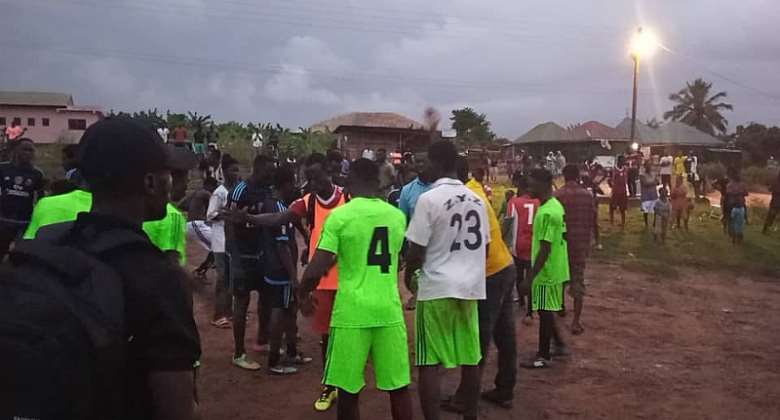 On October 10, 2021, Mensah Mental Health Rehabilitation Project (MEMHREP) decided to celebrate the World Mental health Day (WMHD) by organising a football gala at Ekyem park in the Ejisu municipality in Ghana. The main reason behind this was to engage the youth on mental health awareness and prevention of drugs and alcohol abuse.

The first match started at 2:00pm by the Aboboyaa and Ekyem town teams. They played 25minutes for the first half with Aboboyaa winning by 1:0. The second half ended with scores 2:2, after which the Aboboyaa team won by penalties 3:2. Various teams took part with 55players.There were several community and religious groups, and leaders present at the event. At around 5:00pm, the match ended, and all players were refreshed.

After the first 2 matches, all the players from the various teams came together, as well as everybody present. Hon. Emmanuel Baidoo (Bonwire Assemblyman) and Mrs. Mary Ocansey (Community Mental Health Nurse) spoke on the causes and prevention of mental illness, as well as ‘Mental Health in an Unequal World’.

Mr. Adu Gyamfi, Founder and CEO of MEMHREP, sent a message to the attendees, stressing the need to treat psychological struggles the same way as physical ones. He further appealed for respect for human rights of people living with mental health conditions.

The theme for the World Mental Health Day, 2021 is ‘Mental Health in an Unequal World’. The world is increasingly polarized, with the very wealthy becoming wealthier, and the number of people living in poverty still far too high.

2020 highlighted inequalities due to race and ethnicity, sexual orientation and gender identity, and the lack of respect for human rights in many countries, including for people living with mental health conditions. Such inequalities have an impact on people’s mental health.

Many people with mental illness do not receive the treatment that they are entitled to and deserve and together with their families and carers continue to experience stigma and discrimination. The gap between the ‘haves’ and the ‘have nots’ grows ever wider and there is continuing unmet need in the care of people with mental health problem.