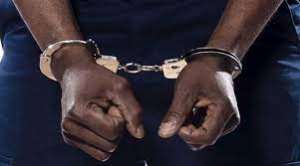 The three suspects arrested by the Takoradi Divisional Police Command for faking a kidnapping and demanding a ransom of GHS5,000 will be arraigned before Court today, Monday, October 25, 2021.

The suspects as announced by the Police include Joana Krah age 29; Susana Awortwe, age 27 and Francis Eshun age 27.

Reports indicate that suspect Joana Krah conspired with the other two suspects, to feign her kidnapping on Friday, October 22, 2021, after which a call was placed to her adopted father in demand for the ransom.

After becoming aware that her adopted father had reported to the Police and an extensive search had commenced to find her, Joana showed up at the Takoradi Central Police Station, Saturday, October 23, to confess of only joking with her adopted father that she was kidnapped.

Not taking her actions likely, the Police has arrested her and the two accomplices.

In a statement from the Ghana Police Service, it has said that all three suspects will be processed for court today.

“The three suspects will be processed for court today, Monday, October 25. We are further advising the public to desist from the act of faking kidnapping for monetary gains since it is a criminal act.

“Such perpetrators will be dealt with in accordance with the laws of the State,” part of the statement from the Ghana Police Service has said.