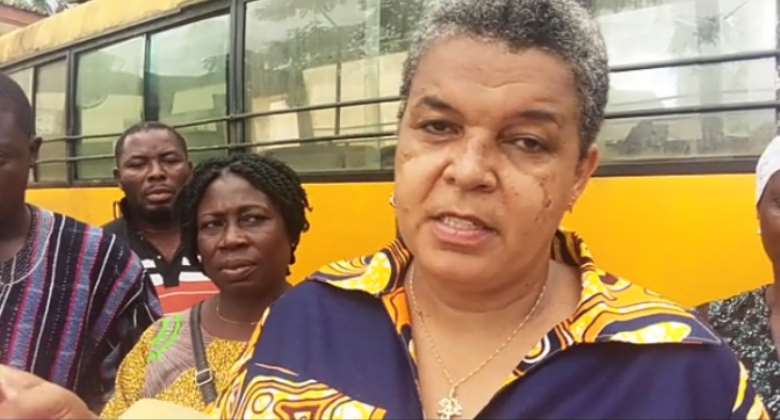 The Bawjiase Polyclinic in Awutu Senya West District currently treats emergency patients in the corridors of the clinic.

The polyclinic lack adequate equipment, wards and beds from the children's ward to emergency ward.

The polyclinic serves about 30,000 people in the area but has two beds at the children's ward, six for female, six for male, nine for maternity and five for emergency response, whilst three out of the five are on the corridors of the ward.

This came to light when the Member of Parliament for the area, Hon. Gizella Akushika Agbotui-Tetteh, donated bags of cement in support of a stalled construction of a ward.

She said the donation is based on a request made to her office to support the construction of the ward facility.

The support comes as part of the MP's commitment to ensure quality healthcare delivery in the district.

Hon. Gizella Akushika Agbotui-Tetteh speaking during the donation admonished government to fix the poor nature of the Bawjiase Polyclinic.

"Yes, government has earmarked Breku as part of its agenda 111, but the existing hospitals must be prioritized to strengthen its operational capacity.

"It's sad the state of a health facility that the lives of about 30,000 people depend on. The government must fix this," she said.

Additionally, her first hand information about the plights of the hospital has further enlightened her on the need for continuous support and that will ensure the needs of the facility are met.

Medical Superintendent at the Bawjiase Polyclinic Martina Johnson, speaking to the media said, the polyclinic lack equipment, ward facilities and beds to accommodate the high number of patients.

"From January to September this year, there's been about 776, birth deliveries at the facility indicating the need for expansion of the maternity ward, provision of beds and other equipment.

"Most of the time we have to combine the children with adults when the ward is overwhelmed."

She said, the polyclinic has advanced to a stage that requires support to deliver quality healthcare to the people, adding that doctors and nurses have exhibited willingness and zeal, however lack the necessary equipment to ensure that happens.

"As a result, we are forced to transfer most patients to Swedru and Winneba Trauma Hospital," she said.

She added that the facility has spacious and vast lands for expansion.

She thanked the MP for her swift reaponse in the provision of the cement and called on government, philanthropists to come to their aid to complete the new ward facility started by the centre.

A patient recounted that she lost her baby this year due to the untimely provision of an ambulance to convey her to the Winneba Trauma Hospital.

"I lost my baby this year because there was no ambulance to convey me after being transferred to Winneba. When we got to Winneba, I was told the baby was dead so I was operated on.

"People visit this clinic a lot but the clinic lack beds. Apart from that, there are many times that you come and they are unable to deliver you the service required because of lack of equipment," she narrated.

The MP as part of the donation, donated various quantities of cement to the St. Francis Anglican Basic School at Bawjiase, Obrachire D/A Basic School and Obrachire Senior High Technical School at Obrachire for some renovation works in the various schools.

Also, about 60 bags of cement was presented to commence the construction of a durbar grounds after cutting sod last week.