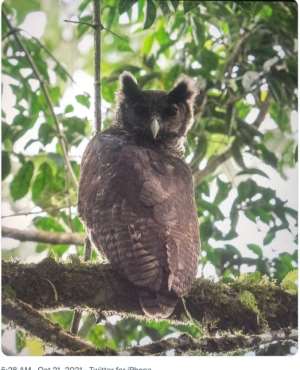 The Shelley’s Eagle-Owl, a giant owl and one of the most elusive and mysterious of all birds, has been rediscovered in the Atewa Forest, after going unnoticed in Ghana by scientists for almost 150 years.

The discovery was made by two British scientists working in Ghana.

The Shelley’s Eagle-Owl Bubo shelleyi was described in 1872 from a specimen obtained from a local hunter in Ghana by Richard Bowdler Sharpe, curator of the bird collection at the Natural History Museum in London and founder of the British Ornithologists’ Club.

A statement signed by Mr Daryl Bosu, Deputy National Coordinator of A Rocha Ghana, an Environmental Non-government Al Organizational and copied to the media said there have been no confirmed sightings in Ghana since then, and very few glimpses elsewhere. It remains almost completely unknown. The only photographs of a living individual were grainy images taken in 1975 of a captive individual behind bars at Antwerp Zoo.

This all changed when, on the 16th of October 2021, the species was conclusively rediscovered by Dr Robert Williams, a freelance ecologist from Somerset, and Dr Joseph Tobias, a biologist at Imperial College London and leader of a UK-government funded field project studying biological impacts of agricultural development in Africa.

The scientists, who visited the Atewa Forest during their time in Ghana, disturbed the huge bird from its daytime roost while they were walking in the forest, and initially thought it was an eagle as it flew through the tall trees.

Luckily, it perched on a low branch, where they had a few seconds to clinch the identification and take the first known photographs of a wild Shelley’s Eagle-Owl.

According to records available, there have been occasional reports of Shelley’s Eagle-Owl over recent decades with brief sightings or calls heard from a few different localities across West and Central Africa from Sierra Leone to Angola and eastern Congo. Most of these records are unconfirmed.

The species has therefore become a ‘holy grail’ for birdwatchers in Africa and beyond. Shelley’s Eagle Owl is officially classified as Vulnerable to extinction by the International Union for Conservation of Nature with an estimated population of only a few thousand individuals.

The fact that a predator of such massive size had become essentially invisible over a large swathe of Africa fuelled speculation as to its current whereabouts and reasons for its apparent rarity.

Commenting on the observation, Dr Nathaniel Annorbah of the University of Environment and Sustainable Development, Ghana, said “This is a sensational discovery. We’ve been searching for this mysterious bird for years in the western lowlands, so to find it here in ridgetop forests of Eastern Region is a huge surprise.”

He noted that this latest discovery adds credence to the clarion call by Civil Society Organisationss (CSOs), State Agencies as well as the International Community of the need for the Government of Ghana to secure the Atewa Forest by protecting it from all extractive activities that will destroy its ecological integrity.

Dr Annorbah said, it was also imperative that we collectively pursue a green development pathway, that will ensure the complete protection of the forest’s ecosystem services of water provisioning, habitat for teeming biodiversity as well as climate amelioration services, which cannot be overstated

In November 2020, the International Union for Conservation of Nature passed an International Resolution calling for global action to make Atewa Forest a National Park to secure its invaluable biological assets as well as its crucial water provisioning services for over five million Ghanaians.

With all the recent discoveries in Atewa, it is becoming increasingly clear that Atewa Forest is the jewel in the crown of Ghana’s forests and needs all the necessary protection it can get.