We Need the Expenditure for Mahama’s Thank-Your Tour 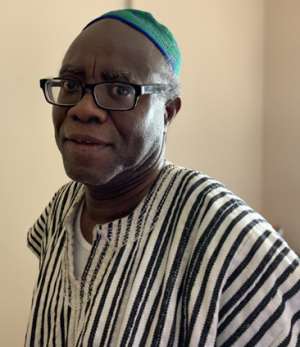 I was about to prepare this column for publication when the Ghanaweb.com news report captioned “Kweku Baako ‘Sets the Records Straight’ on Aflao E-Block” (10/24/21) hit the banner news headlines. Which is all well and good because the report, contrary to what his most inveterate and ardent critics would have the general Ghanaian public believe, it is rather former President John “Akonfem-Kanazoe” Dramani Mahama, and not President Addo Dankwa Akufo-Addo, who has literally been sleeping at the wheel. That the Gonja-born democratically ousted former President, from the Akufo-Addo-created Savannah Region, is inordinately obsessed with being returned to power, so that he can, once again, get the chance to profusely bleed the wantonly exploited Ghanaian taxpayer to the marrow, is evidenced by the fact that nearly a year after his second blow-out defeat by Nana Addo Dankwa Akufo-Addo, Mr. Mahama is still hazily and profligately traipsing the country while his neglectfully abandoned projects are deviously and mischievously made the problem of his visionary and progressive successor.

Now, what Mr. Abdul-Malik Kweku Baako’s Facebook Wall rejoinder to those rabid Akufo-Addo critics who would have the latter gratuitously saddled with the abjectly gross track-record of the incompetence of his predecessor means is the fact that, once again, Nana Akufo-Addo has proven himself and the political party that he leads, to wit, the New Patriotic Party (NPP), to be absolutely without any coequal on Ghana’s postcolonial political terrain. Even more significantly, Mr. Baako’s Facebook Wall report clearly and eloquently exposes the Paramount Chief of Aflao for being the rabble-rousing pro-NDC charlatan that many of us have come to envisage Torgbui Amenyo Fiti, V, to be for quite a considerable while now. The Editor-Publisher of the New Crusading Guide tells us that, in fact, the so-called Mahama E-Block in Aflao and other parts of the country, which the payola-addicted former President left uncompleted have not been abandoned, after all.

Rather, President Akufo-Addo has had to literally squeeze the requisite fiscal resources out of a stone to complete these state-of-the-art school buildings, because the man who commenced the same had apparently not planned to complete them, at least not within the temporal span promised Ghanaian voters and citizens. Now, to cut to the proverbial chase, Mr. Baako tells his audience that the Aflao E-Block is 96-percent completed. We are, however, not informed about the percentage of completion at which the former President had callously and grossly incompetently abandoned the project. But this clearly does not seem to matter or be of any moment or consequence, because the project is almost certain to be completed by the close of the present fiscal year by the Akufo-Addo-led government of the New Patriotic Party.

Now, what the preceding clearly tells us is that the Paramount Chief of Aflao raised the issue of the Mahama-commenced E-Block because he may have been paid by the former President to do precisely that. Otherwise, Torgbui Adzongaga Amenyo Fiti, V, may be aptly seen to have been sleeping on his stool or throne and not paying sedulous attention to critical and salutary developments on the ground, as it were, in his own traditional jurisdiction. Which is why unlike Mr. Baako, the Editor-Publisher of the New Crusading Guide, the Aflao Paramount Chief was not even aware of the fact that the Mahama-abandoned E-Block was very far advanced and, in fact, nearing completion. Obviously, Torgbui Amenyo Fiti was far more interested in publicly embarrassing President Akufo-Addo, for whatever such contretemps may be worth, than being interested in the glaringly inescapable fact that “The Little Man from Kyebi” cares far more about the future prosperity of the youths of Aflao than had been demonstrated by Kwame Gonja in the 8 years that the latter and his late boss, President John Evans Atta-Mills, literally ruled the roost.

Now, I am also wondering whether the humongous amount of money wastefully being spent on his so-called Thank-You Tour could not have done a far better and more tangible “Thank-You” job, if the seismically trounced Candidate Mahama wisely contributed the same, or at least a sizable portion of the same, to the E-Block Completion Fund at the Dr. Yaw Adutwum-headed Ministry of Education. In the instantaneous age of cyberculture or the global space-bridging Internet, or the Internet Explosion, is there no better and far less fiscally wasteful or cheaper way for a twice roundly rejected Candidate Mahama to express his gratitude to those intelligent and foresighted Ghanaian citizens and voters who mercifully put him out of his thievish misery by showing Kwame Gonja the main exit out of Jubilee House, the Indian Government and Kufuor-constructed Golden Stool Edifice, which this brash and disdainful Bole-Bamboi “skinhead” insists on renaming the Flagstaff House?