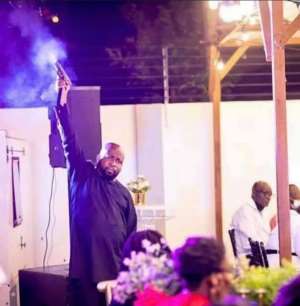 The Executive Director of Alliance for Social Equity and Public Accountability (ASEPA), Mensah Thompson, has given a 24-hour ultimatum to the Ghana Police to arrest Charles Nii Teiko Tagoe, a presidential staffer.

Charles Tagoe, in November 2017 pulled out a pistol and fired shots in the air at his birthday party in Achimota, a suburb of Accra.

Tagoe, in an interview with Happy Fm at the time, denied firing the gun at his party.

According to him, it was some taxi drivers who fought over a missing taxi that was spotted near the venue of the party.

He noted that it was himself who had to dole out an amount of fifty Cedis to pay for the fuel of the vehicle for it to be driven to the nearest Police when the patrol team came to the scene.

Years after the incident, Mensah Thompson is demanding the arrest of the presidential staffer, days after rapper Medikal was arrested and arraigned before court for just displaying a firearm on social media.

According to him, he would be left with no other options than to petition the Police Service, if the presidential staffer is not arrested over the 4-year old incident.

Since the arrest and incarceration of Medikal, calls have been growing for the arrest of celebrities such as Afia Schwarzenegger who displayed weapons on social media in the past.